Architecture firm Ménard Dworkind has created a microcosm of Chinatown at this a colossal pan-Asian restaurant and bar in Montreal's Laval suburb.

When local designer Guillaume Ménard was approached to convert the former Moomba mega-club into a Chinese beer garden, he tapped architect David Dworkind to partner on the project. The collaboration spurred the founding of their eponymous studio Ménard Dworkind.

The team sought to manifest a space attractive enough for buzz-seeking Laval residents, who typically commuted to Montreal for trendy, photogenic restaurants.

Dworkind and Ménard traveled to Chinatowns in Montreal, Vancouver and San Francisco to study the neighbourhoods' aesthetic consistencies. Neon-lit signage, folding scissor gates and hanging lanterns were a few of the takeaways they incorporated into Miss Wong's cinematic design.

"There was no shortage of inspiration for this project," Dworkind told Dezeen. "We wanted to create the vibrant energy of Chinatowns around the world where you're bombarded with signage and visual noise."

At 930-square-metres, the massive venue offered a lot of creative freedom, but was also beset with design challenges.

"With a space this large, our instinct was to subdivide it into smaller zones for intimate socialising," said Dworkind. "We played with different stage levels and heights for each area, creating unique environments." 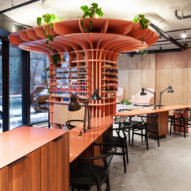 Guests enter Miss Wong the through a low-ceilinged passageway and a vintage decorative Chinese arch. Emerging under a mini-Chinese pagoda on the other side, they're greeted by eight-metre-high ceilings, vintage neon lightboxes and disco balls in the main dining area.

The central space takes cues from traditional beer gardens with long communal tables and concrete flooring. Four additional "zones" are tucked into multi-platformed pockets around the venue to recreate the lounge-like intimacy of an opium den.

Each of these areas  in the emporium presents a distinctive vibe through texture and colour, such as emerald carpeting in the Green Zone and the Red Zone's red epoxy floors.

"This allows guests to have a different dining experience every time they visit," said Dworkind.

Additionally, Ménard Dworkind chose lighting that respectively combined the kitsch and culture of Chinatowns around the world. Many of the fixtures are custom made with items purchased in Montreal's own Chinatown, including pendant lighting made from folding paper fans and the Red Zone's lantern-covered ceiling.

Forming an archway behind the main bar are lanterns hanging from powder coated steel "canes", which mimic the traditional curved lanterns cast over the boats of Chinese fishermen. "After learning that Montrealers are coming all the way to Laval for Miss Wong, we know we've done our job."

Other projects by the collaborative office include a beauty salon in Montreal, which also features hacked pink armchairs and IKEA sinks as foot baths.

Dworkind has also completed a number of interiors in the Canadian city prior to teaming with Ménard – including a falafel shop "inspired by a classic New Balance sneaker" and a Lebanese snack bar and bakery.