Reina & Asociados has transformed the vaulted brick cellars of the Palacio del Rey don Pedro at Seville's Royal Alcázar into an exhibition space.

The refurbishment opens up the previously closed vaulted chambers to the public and will eventually serve as an exhibition space for a selection of archaeological artifacts gathered from the Alcázar's collection.

Located inside the walls of Seville's Alcázar, the Palacio del Rey don Pedro – also known as the Mudéjar Palace – was built by King Pedro I of Castile in 1364 along with the rest of the royal palaces and gardens that make up the Alcazar.

The Alcázar was built on the site of an Abbadid Muslim residential fortress that was destroyed after the Christian conquest of Seville. Although little of the original Islamic palace remains its influence can be seen throughout.

Used as cellars, the sequence of underground vaulted spaces was modified at the end of the 16th century, during the reign of Philip II, when they were adapted to be better linked to the Renaissance gardens.

Larger entranceways and pathways were inserted to create a more fluid connection with the Alcázar's Jardín de la Galera (The Galley's Garden) and Jardín de Troya (Troy's Garden) as well as improved ventilation. However subsequently, the spaces were then returned to use as either storage and service areas.

"The basement is currently presented as a valuable and hidden container, essential for understanding the construction of the Mudéjar Palace and its relationship with the gardens and historic gardens over time," said the practice, which is led by Francisco Reina Fernández-Trujillo. 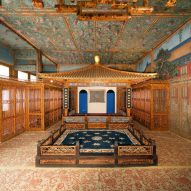 "The practical absence of coatings allows the vision of the rich textures of its Mudejar brick factories, meticulously consolidated and restored during the works."

The cellar's brick walls and vaults have been carefully restored and a new floor has been installed.

A natural stone surface conceals the facilities and services that are required to condition the spaces and adapt them for a visiting public.

"This unitary plane of amber cream natural stone of small format and neutral tone, is removed on the perimeter to reveal the original remains of floors and baseboards," explained the architecture studio.

"The recovery and restoration of the existing gaps establishes conceptual ties with the intervention carried out in the 16th century in which the relationship of the buildings with the gardens intensifies."

The openings that were enlarged in the 16th century are now glazed to provide natural lighting, and are complemented by an indirect lighting system that is directed towards the coatings preserved at the base of the walls.

Other recent restoration projects include the revival of a medieval church with lead-clad extensions by McCullough Mulvin Architects in Kilkenny, Ireland, and Haworth Tompkins' public foyer for Bristol's Grade I-listed Old Vic theatre.