Featuring curved corners and ribbed details, this extension to a Seville house was designed by local architects Studio Wet to create a large living room and kitchen adjoining the garden.

Studio Wet designed the two-storey extension for a residence in Castilleja de la Cuesta – a town on the outskirts of the Spanish city. Built in the 1950s as part of a social housing project, the existing property featured tiny rooms but a generous garden.

Architects Jose Gómez Mora and Daniel Montes were approached by the owners, a couple about to retire, who wanted to replace an existing poorly constructed extension. They asked that the new addition create a large living area with a better connection to their garden.

Aiming to provide a contrast between old and new, the architects rounded the walls where the extension meets the existing building.

"Our proposal respects the personality and context of the existing building, meaning that we avoid modifying its original structure and external aesthetics and instead enhance the existing building through adapting a completely different language for the design of the extension," Gómez Mora told Dezeen.

"Through the reverberation of curves we gain some visual coherence for both us and the client," he added. "To simply put it, the curves help indicate the new elements and spaces added."

To keep within a tight budget, the architects adapted traditional methods to construct the addition for Casa Lissen. Like the existing building, it is made up of concrete columns, beams and slabs with brick load-bearing walls rendered with mortar.

But to add a contemporary aesthetic, the floor slab between the two levels remains exposed on the outside, while mortar covers the rest of the walls. Ribbed detailing across the exterior continues the curve motif, as well as masking imperfections in the mortar finish.

"A perfect curve is actually difficult to build with the techniques we had due to the budget, and the construction limitations of southern Spain," said Gómez Mora. "By using smaller curves in the facade, the ribbed detailing, these imperfections disappeared, or at least they are less visible."

On the ground floor a small kitchen occupies one curved volume, while the open-plan living and dining room is placed in the rear side facing the garden with large glass doors that open onto it.

Two bedrooms, identical in size and shape, occupy the upper level of the extension, and have glass doors that open to a terrace bound by white railings with U-shaped sections.

The architects also reconfigured and renovated the existing property, creating a library and study on the ground floor, and a large master bedroom on the first floor.

Continuing the motif, they replaced existing walls with new curved ones. A curved lightwell tops the wooden staircase, while the first floor bathroom has a new rounded wall.

"With very small changes in the layout we gain a different interior, where the spaces that were completely distorted also suffer from curves, especially the stair hall, even where only that can happen in the hanging ceilings," said Gomez Mora.

Simple monochrome finishes are used across the property, including black window frames, white-painted walls and dark grey tiling on the floors. The bathrooms are lined with white tiles.

The team also renovated the small pool at the end of the garden, adding a set of steps in the same ribbed style as the main house. Updates to the adjacent pool house include a new upper-level deck that offers views across the surrounding suburbs. 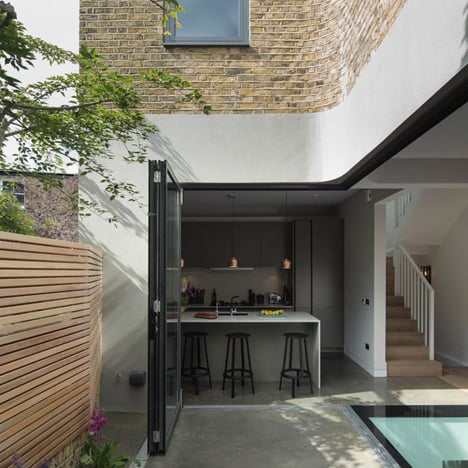