Casson Mann used 3D laser scanning to create replicas of 20,000-year-old cave paintings at the Lascaux International Centre for Cave Art, which won Interiors Project of the Year at Dezeen Awards 2018. The designers explain their process in this movie.

Roger Mann, creative director of Casson Mann, told Dezeen that he wanted to explore a connection with the past through the reconstructions of the Paleolithic paintings found on the walls of the Lascaux caves.

The centre, located in the rural village of Montignac in southwest France, comprises a series of galleries containing resin-cast replicas of the 20,000-year-old paintings.

Designed by Norwegian architects Snøhetta, the museum is in close proximity to the original caves. These have been closed to the general public since the 1960s, after over-exposure to carbon dioxide caused damage to the paintings.

"All that moisture that people gave off caused mould to grow on the original painting," Mann explained.

Casson Mann used 3D laser scanning to capture the surfaces of the painting, before casting resin facsimiles of the rock surfaces. Twenty-five artists copied the paintings onto the resin over a two-year period, using similar pigments used for the originals millennia ago. 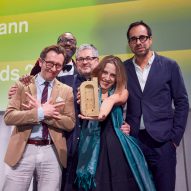 The replicas hang from the ceiling above the heads of the visitors, while the acoustics and temperature of the interior mimic the caves' original conditions.

"What we wanted to do was take that skin of the cave and reproduce it in an environment for visitors to be able to see it closely, to contemplate it," said Craig Riley, a designer at Casson Mann.

Rather than just creating a facsimile, the designers introduced an educational element through additional animations.

"We put a layer of understanding through digital technology that didn't interfere with your experience of the cave," Riley said.

With the use of modern technology, Casson Mann aimed to create an experience that is as authentic as possible, in order to bring visitors closer to the Palaeolithic paintings.

"It's something that people connect with very emotionally," said Mann. "So when we did this space that's something we wanted to build on essentially – to explore that connection with our past."

Casson Mann's design for the museum also won the award for Cultural and Civic interiors at the inaugural Dezeen Awards ceremony last year, where 33 winners across the categories of architecture, interiors and design were named.

Find out how you can enter your project ›