The Agenti Climatic masterplan will see the transformation of the Scalo Farini and Scalo San Cristoforo railway yards on the outskirts of the Italian city. OMA and Laboratorio Permanente plan to turn the former train depots, to the north and south of the city, into "ecological filters".

Scalo Farini, which covers 468,301 square metres, will be transformed into a "green zone" with a large park, while the 140,199-square-metre San Cristoforo site, will become a "blue zone" containing a linear waterway.

The green zone will be cool hot winds from the southwest, while "purifying the air of toxic particles", and the blue zone is designed to clean groundwater.

"The most valuable currency is no longer 'brick' – the built – but rather the climatic conditions that cities will be able to provide and ensure for their citizens."

The studios hope that the parks will demonstrate how pollution can be overcome on a city scale.

"The city of the twentieth century, with its high energy consumption, must be overcome by reconsidering the principles that have marked urban development since the classical era," continued Laparelli. 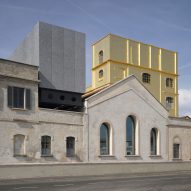 Milan "will benefit from Brexit" as the city grows in confidence and status, say designers and critics

The Agenti Climatici masterplan imagines that buildings and their uses within the two parks will be developed over time in line with the growth of Italy's economy.

"The scale of developments is contingent on the city's future economic developments, creating an adaptable and resilient spatial framework that can respond to the shocks of national politics and the global economy," added OMA.

The plan forms part of Milan's wider regeneration of the abandoned infrastructural areas on its periphery. OMA and Laboratorio Permanente will also introduce the first cycle highway to the city, as well as a new tram line, metro stations and bridges.

The studios were selected to create the masterplan by Ferrovie dello Stato, FS Sistemi Urbani and RFI, in collaboration with the municipality of Milan, from a list of five finalists, which included teams led by Kengo Kuma and Associates Europe, Arup, Grimshaw and Baukuh.

Milan is becoming a major cultural destination according to several prominent figures who were in the city during design week last month. Along additions to its cultural offering like the Fondazione Prada, also designed by OMA, the city has invested heavily in pedestrianisation schemes, parks and cycle-hire projects.

Elsewhere in the city, Carlo Ratti Associati is designing a new science campus for the University of Milan that will have brick facades made by robots. Zaha Hadid Architects also recently completed the twisted Generali Tower, and Foster + Partners created an Apple Store fronted by a dramatic water feature.

Visuals are courtesy of OMA and Laboratorio Permanente.