The works are among 10 pieces, including seats and tables, featured in Bakker's Slow Motion exhibition at the Manhattan gallery.

Bakker used a range of finishes to create the designs in a variety of colours and abstract shapes. These include stone, marble, basalt and urushi lacquer – a glossy, protective coating that has been used in Japan for centuries.

For his urushi pieces, Bakker enlisted the help Latvian craftsman Sergej Kirilov, who has mastered the traditional technique.

"This is an ancient craft; a very rich tradition," Bakker told Dezeen.

Urushi is found in the sap of trees native to Japan, China and Korea, which includes a resin that hardens over time to offer a protective layering. It is applied to objects by hand in layers and left to dry.

The duo chose to use foam as the base to prevent the urushi cracking during this process.

Typically, urushi is pigmented either black or a burnt orange, as seen in Bakker's 4PRTS piece. The designer also sought to introduce a whole range of hues to the collection, with pieces like the olive green Console/Table, whose top resembles a cylinder cut in half.

"When you use this material, there are hundreds of different techniques, so we can do so many things and it's very durable," Kirilov said.

"We made use of all colours that we can imagine," Bakker added. 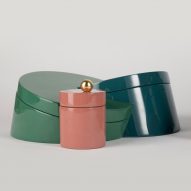 Bohinc Studio similarly introduced a suite of pastel colours for its series of urushi lacquer boxes.

Bakker's wider Slow Motion series also includes the Weight/Wait seat, which is made from basalt volcanic rock. The shape could be likened to a human figure bowing down.

The Slow Motion pieces feature a host of unusual shapes and rounded surfaces that could be likened to the softness of moulded clay. Bakker, who spent nearly a year creating each piece, described the process as organic.

"There's never a plan," he told Dezeen. "The works come gradually. I follow my feelings, and this is the outcome."

The ambiguity of the objects follows in the style of previous works by Bakker, who started his career making jewellery and models for his parents in 1987, and then branched out to create sculptural furniture, homeware and tableware.

Examples include a minimal swing and a number of more ambiguous objects and a series of jugs.

In the Carpenters Workshop Gallery exhibit, the objects are dispersed throughout the space in order to allow the viewer to pause and question the meaning of their functionality.

"Powerful, elegant and filled with personality, Aldo's furniture brings a new perspective, not seen before in the design space," said gallery co-founder Loic Le Gaillard in a project statement.

Carpenters Workshop Gallery was founded in London in 2006 by Le Gaillard and Julien Lombrail in a former carpenter's workshop. It now has locations in Paris and San Francisco.

Photography is by Carpenters Workshop Gallery.