The subversive gesture was intended to show his "opposition to an increasingly apathetic, throwaway culture," the designer said.

"Recycling ultimately legitimates consumption," Wanders told Dezeen. "Reusing objects removes the guilt of throwing them away. Let's not recycle what we can reuse."

Wanders said British designer Lovegrove gave him the plastic bottle as a gift several years ago. The PET bottle, regarded as a classic, features a rippling surface that evokes flowing water.

Wanders recently found the bottle in a drawer and started to use it, marking it with a pen each time he refilled it from the tap.

"For three months the bottle was with me everywhere," Wanders said. "I have filled and emptied it around 200 times in that period."

The idea of submitting a used bottle for the show, held at the Museo Nazionale Scienza e Tecnologia Leonardo da Vinci during Milan design week, came to Wanders after members of his studio tried to convince him to take part in the initiative, which was intended to showcase products made of recycled or recyclable plastic.

"I didn't want to do it," said Wanders. "I disagree with [Orlandi's] fundamental proposition."

"Since some designers in my studio really wanted to be part of the exhibition we discussed it in length and I got fired up in the conversation with them. That's why my design was in the exhibition, opposing the exhibition." 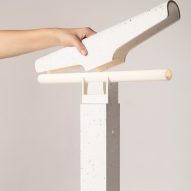 For the exhibition, Wanders added some graphics to Lovegrove's bottle and displayed it on a pedestal.

"Most things that we throw away are not broken," Wanders added. "They are not even damaged, we are just fed up with them. This is a material problem with a psychological cause."

Wanders, one of the world's most successful designers, is known for expressive designs that are often colourful and highly patterned. He is also co-founder and creative director of Dutch furniture and lighting brand Moooi.

His comments come at a time when concern is rising about plastic pollution. This week, scientists published research showing that so-called biodegradable plastic bags remain intact three years after being dropped in the sea or buried underground.

In April, recycling expert Arthur Huang told Dezeen that bioplastics could be just as bad for the environment as fossil-fuel plastics.

Last year, design curator Jan Boelen said moves to encourage the use of recycled plastic were "bullshit" since they perpetuate the plastic economy.