London studio Assemble has transformed an industrial property in New Orleans into a hub for the local community to learn fashion design and manufacturing.

Assemble designed the Material Institute for creating and producing garments and textiles as part of an experimental arts school founded by the Museum of Old and New Art (MONA) in Hobart, Tasmania.

The studio has been involved with the New Orleans school since 2016. It proposed creating the Material Insititute to offer local youth, aged between 14 to 30, a place to develop artistic practices.

"Material Institute is a place where students are able to express themselves in a creative and professional way, and are supported to gain financial independence through their craft," Assemble's Maria Lisogorskaya told Dezeen.

"The goal of the Institute is to provide space, tools and professional guidance to those who would not have access to these opportunities otherwise – communities for whom affordable enriching education has been lacking," she added.

Teaching practices are intended to be experimental, drawing on the precedent of North Carolina's Black Mountain College, which was founded in 1933. The school, whose teachers included Buckminster Fuller, focused on a holistic and unusual approach to education, including non-hierarchical methods and allowing students to chose when they graduated.

"Material Institute grows out of the incredible, unique and diverse heritage of craft, costuming and fashions of New Orleans, as well as progressive educational models such as Black Mountain College," said Assemble's Louis Schulz.

"The Institute's programme is designed to encourage learning through hands-on experimentation in both traditional craft and high fashion," she continued. 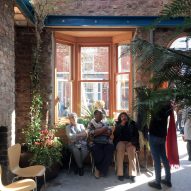 The project involved the overhaul of a former car mechanics garage in the southern city's St Roch area, which is a 10-minute drive from the well-known French Quarter. The Embassy recording studio and 24 Carrot cooperate garden,  also founded by MONA, are nearby.

Assemble has kept finishes simple, including exposed concrete floors and white-painted walls and brickwork. These are contrasted by orange-hued exposed structural beams, and ceilings coloured mint, which forms part of the overall aesthetic to team the industrial and the tropical.

A key feature of the interiors is a series of openings defined by rugged edges, as if they were created during demolition. "The large windows were created by removing sections of existing cinder blocks, exposing the block edges behind slick panes of glass," said Lisogorskaya.

For the furniture, Assemble designed and welded everything on site. A sewing room features bright orange chairs and chandelier prototypes dip-dyed in indigo.

The studio collaborated with local and global fashion and textile designers for the entire project, from its inception to the current state.

In addition to creating the physical space, Assemble also designed the pilot phase of the educational programme, which ran from November to December 2018. The founding curriculum includes pattern cutting, draping, design, textile experimentation, embellishment and textile printing, culminating in a fashion show on-site.

The programme is currently operating at an interim scale of a short 10-week programme. Plans are for the school to become a permanent institution for New Orleans.

Founded in 2010, Assemble has created a handful of projects in barren plots, such as turning two derelict houses into Liverpool's Granby Winter Garden and designing Goldsmith's art centre in London in a public bathhouse.

Photography is by Kelly Colley unless stated otherwise.