The Street Tree Pods are teardrop-shaped structures made from wood, designed to merge with existing or new trees.

Taking up the same amount of space as a single car-parking bay, each structure would offer short-term accommodation to a single occupant. Chamberlain sees them being occupied by students, young professionals and first-time buyers, or to people who are homeless or in the process of being rehoused.

"Street Tree Pods seeks to offer a fresh insight into urbanisation and community living within London, tackling and challenging both the current housing crisis and the growing pollution issues within the city," explained Chamberlain.

"These self-sufficient, low impact urban tree pods merge the house and street tree together, facilitating humans innate attraction towards nature and natural processes, along with focusing on the importance of wellness and sustainable architecture."

The curved wooden form of the design is intended to reference inosculation – the natural phenomenon where the branches, trunks and roots of two trees grow and merge together.

Cedar shingles would give the buildings a natural, textured cladding, while wooden bird boxes would be installed on top, set amongst the tree branches.

Chamberlain, who completed the project as part of his MA in architecture at University of Westminster, believes the project can help people to realise that trees are "a vital piece of infrastructure for a city".

He claims the project could increase both the density of greenery and housing in the UK capital, while also allowing residents to enjoy the psychological benefits of being surrounded by nature – often overlooked in urban environments.

"Trees have proved to decrease obesity, reduce certain health risks and aid mental behaviour and ultimately make people feel happier and more positive in their day to day lives," he told Dezeen. "Too often, however, they are disregarded as a vital component of urban master planning infrastructure and healthcare."

"This project is quietly arguing that more should be made to live among our natural landscape," he continued.

"It is not enough to simply move it out of the way for our architectural interventions. Trees are imperative to the success, health and wellbeing of all people and only ever provide advantages to our quality and way of life."

Tree trunks would run through the core of each structure, providing structural stability and ensuring no weight is placed on the branches.

The trunks would be enclosed in an ETFE shell – a system that would allow water to reach the tree and run through to the ground – while a rubber gasket between them will allow the tree to expand whilst remaining sealed.

Outside, the leaves of the trees would be used as a natural shading device. 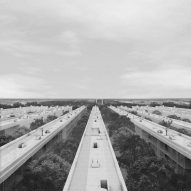 To access the treehouses, each structure would incorporate a retractable ladder that could be operated from outside.

This would lead into each dwelling, where Chamberlain has designed four storeys. The lowest level is the plant room, which would contain the rainwater storage tanks, air source heat pump and bio digester.

Above, the second floor would house a kitchen and living space, with a small bathroom and balcony, while the third hosts a shower room, workspace and storage. Lastly, the top floor is the bedroom with roof light.

Chamberlain has also conceptualised a raised cycling highway that would connect each of the pods throughout the city. This would be accessible through doors positioned at the third level of each treehouse.

Additionally, a Street Tree Pod app would work as a real-estate portal for the dwellings.

"The Street Tree Pod app was designed as a vision for how the project would develop in the future," said Chamberlain. "The home screen of the app displays all the various types of street tree pods available, along with the relevant information that define it such as number of bedrooms and type of tree."

While Chamberlain designed the Street Tree Pods concept for the London Plane Tree, he has also developed a parametric algorithm that would enable it to be extended for use by different trees of varying shapes and sizes.

Other designers to have responded to London's housing crisis include Royal College of Art architecture graduate Llywelyn James, who proposed a series of elevated residential blocks for a brownfield site, and Opposite Office, which reimagined Buckingham Palace as a co-living space for 50,000 people.