Over 1,000 architecture and heritage experts have called on France's president to reconsider plans to rebuild Notre-Dame before the Olympic Games in 2024, saying the reconstruction should be carried out "without haste".

Former director of the Metropolitan Museum of Art Philippe de Montebello is one of 1,170 experts to sign a petition calling for greater consideration over the plan to rebuild Notre-Dame before the city hosts the Olympics.

"Let's take the time to find the right path and then, yes, set an ambitious deadline for an exemplary restoration," reads the letter. "Let us not erase the complexity of the thought that must surround this site behind a display of efficiency."

French newspaper Le Figaro published the open letter to president Emmanual Macron that was signed by architecture, art and heritage experts, including president of the association of heritage architects Rémi Desalbres and general administrator of the Louvre museum Wanda Diebolt.

After Notre-Dame suffered a serious fire last month, which saw the spire collapse along with most of the roof, Macron made a televised address promising to restore the cathedral in just five years.

Macron must listen to experts

It's a timeline has already been flagged by experts in medieval architecture as less than half the predicted time for a project of this magnitude and sensitivity.

"Let's take the time to diagnose. The executive can not do without listening to the experts," continues the letter.

"These French and international resources put the best chances on the side of France to restore Notre-Dame de Paris in its symbolic dignity. Let's listen to them. Let's trust them, trust them, without delay but without haste." 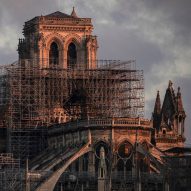 In the aftermath of the fire French prime minister Edouard Philippe floated the idea of holding an international architecture competition to replace the 19th century spire designed by Eugène Viollet-le-Duc, which collapsed in the flames.

News of the competition has prompted architects from around the world to release visualisations of their ideas for replacing the spire.

Notre-Dame should not become "a gesture of architecture"

But the experts cautioned against making the restoration process simply about the architectural grandeur of the landmark.

"The world is watching us. It is not a gesture of architecture but of millions of gestures, humble and experts, governed by science and knowledge" said the letter.

The signatories also reminded the French president that the government had failed to prioritise the preservation of the landmark building.

"Throughout this history, France has long played a leading role, relying on institutions of excellence training protection specialists, recognised internationally and attracting students from around the world," said the open letter.

"Unfortunately, this excellence has also been somewhat forgotten by previous governments."

Before the fire Notre-Dame had been undergoing urgent restoration work, which may have accidentally led to the fire. In 2017 an appeal called Friends of Notre Dame was launched to try and raise the €1 million (£860,000) needed to restore the gothic cathedral's crumbling flying buttresses and spire.

Now over €1 billion (£860,000) has been donated towards the rebuilding project, mostly from French billionaires.