HASA Architects has made a host of subtle new interventions to the ground-floor apartment situated in the affluent neighbourhood of Mayfair.

"We responded positively to the limitations of the listed building, taking cues from the fabric and layout to inform and enrich the design," explained Charlotte Harris and Mark Stevens, who head up the practice.

"Careful attention was paid to the distances and junctions between the historic and contemporary layers to ensure old and new quietly co-exist and complement each other both visually and programmatically."

The apartment is set inside a five-storey Georgian terrace, where the client has lived on the second floor since the late 1990s. They decided to purchase the apartment below when it became available in 2015, and later approached HASA Architects to transform it into a liveable space that could be sold or let out.

Rather than make dramatic alterations to the apartment's historic framework, the practice instead decided to use partitions, sliding doors and freestanding joinery to delineate different living spaces in the home.

Original ornate moulding that runs along the ceiling, doorways, and window frames has been restored, and all walls have simply been freshened up with a coat of white paint.

A beam of white American oakwood has then been suspended across the main living space to form a mezzanine, which accommodates a master bedroom. Each side of the room is flanked by white concertina doors that can be drawn across to provide privacy to inhabitants. 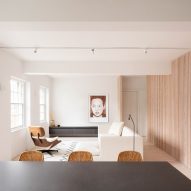 The mezzanine level appears to be supported by an asymmetric panel of steel, which actually serves as a balustrade to the apartment's original staircase.

A breakfast island in the adjacent kitchen made from Veiny Arabescato marble has tall storage cupboards with handleless doors have been created to neatly conceal cooking appliances.

The architecture studio ensured that these were set away from the surrounding walls to allow any existing architectural details to "remain uninterrupted".

A dressing room and extra bathroom have also been created at ground level, accessed via a concealed door. The space is centred by a huge open shelving unit crafted from sycamore wood where inhabitants can keep clothes or accessories.

"The colour and material palette are purposefully pared-down to create a harmonious and soothing environment that focuses on space and light to bring the property to life," added the practice.

HASA Architects was founded by Harris and Stevens in 2015. The practice's Mayfair apartment isn't the only London dwelling to boast a pared-back aesthetic – earlier this year Proctor and Shaw designed a flat in Marylebone to feature a simple timber partition wall and natural-tone surfaces.