Architecture studio Fala Atelier has converted a former clothing factory in the town of Abragão, Portugal, into a block of six bare apartments.

Fala Atelier worked with the existing volume as much as possible, creating open-plan housing they described as "naked" apartments. These can then be altered by residents as they see fit.

"The space is built with the simplest materials and details, with a severe scarcity of means," Filipe Magalhães, partner at Fala Atelier, told Dezeen.

The simple white-rendered volume surrounded by greenery was originally built to resemble housing in order to better fit in with its context.

"The original building had very little 'factory' features – it was supposed to resemble a house," explained Magalhães.

"Via a certain 'industrial' set of decisions, the housing block now feels more like a factory than ever before."

Each of the block's three floors houses a mix of two and three bedroom apartments, connected via a common stairwell, each consisting of a large living space onto which the bedrooms open. 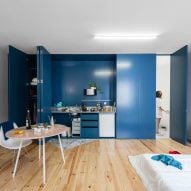 The clear grid of both the interior and the facade has been retained, and the internal concrete structure exposed to become both a visually unifying element and one around which the plan is arranged.

"The axis, off centre due to the different sizes of machines that originally occupied the space, provided a grid. From that point, geometry ruled over the general arrangement," said the architect.

"There are no residential markers, no clues on how to occupy the space. Each apartment is as much a home as it could be a production line."

Generous windows on either side of the building bring what the architecture studio describes as a "sense of luxury" to the otherwise bare internal spaces.

Blue doors and red curtains contrast the dominant white of the original structure and the green surroundings.

"We truly look forward to returning to these apartments in five to ten years to understand what has happened. We really can't predict," Magalhães said.

"This is probably one of our less designed and eccentric projects. Yet, it is one we love to look to several times. Its spatial extravagance is there, even if it is not extravagant at all," added Magalhães.

Fala Atelier have previously converted similarly bare, industrial spaces into new homes. In 2016, the studio converted a former garage into an apartment complete with a parking space.