The house on Rua Faria Guimarães had been added to several times over the 20th century but had been abandoned for decades. However, as the area's gentrification accelerated, Fala Atelier was asked by developer Stunning Chapter to convert the building into flats.

The architects preserved the building's thick granite walls, but removed the facade's ornate tiling, replacing it with a more abstract design of irregular blue and red shapes on a white background. Corresponding blue and red doors lead off the street into the apartment block.

Inside, five almost identically sized flats occupy the three floors. Each is fitted with deep-blue plywood cabinetry, which can be used to conceal or reveal the kitchen, bathroom, storage and windows. This helps to create an uncluttered appearance in the single-room apartments.

"The fragmented arrangement of small inner rooms was replaced with a sequence of almost identically dimensioned apartments," said the architects. "Only upon a second look is the distinction between the five units understandable."

This design varies only slightly between each home, to accommodate the geometry of the staircase, the windows and form of the roof.

Strips of grey-veined stone line a low sill below the windows and provide splashbacks in the kitchens. Small pieces of the same stone are set into the wooden floors to indicate the location of the kitchens behind their blue shutters. This stone outline varies between apartments, with a triangle providing the flooring for one kitchen and a semi-circle in another.

These irregular shapes, echoed in the patterned facade, are also used to embellish the bathrooms.

"In each studio, a piece of natural stone with a different form unbalances the apparently symmetrical inner elevations," said the architects. "The street facade acts as a theatrical device, with its unorthodox use of the traditional local tiles."

Fala Atelier has created a number of other compact living spaces in Lisbon. Among them is a garage conversion that now serves as a home for a young couple and their Fiat 500 car. 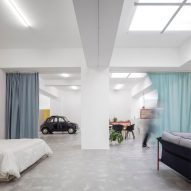