Designers can move easily between drawing in a virtual-reality environment and on their tablet using the latest update to Gravity Sketch.

The Surface Tool feature is contained in version 6.1 of the software, which is one of the primary VR creation tools for designers since its launch in 2017.

The new feature allows designers to open Gravity Sketch on their tablet, create a 2D drawing with their pen, and then pull on a VR headset to turn the sketch into a 3D work and continue manipulating it.

They can send the sketch back to the tablet if they want to add more details that way, or they can implement the workflow in reverse, starting in VR before switching to tablet.

The creators of Gravity Sketch added the feature to cater to designers who were more skilled and comfortable working in 2D than 3D.

Gravity Sketch CEO and co-founder Oluwaseyi Sosanya said that while he envisages all early-stage sketches and ideas being created gesturally in 3D VR space in the future, right now the industry was in a transition period.

The motion-tracked VR controllers, in particular, can represent a steep learning-curve for designers used to drawing with pen on paper or tablet.

"To add some finer details, we found some designers were exporting to other software where they could work with their Wacom tablets, which is what is most familiar to them currently," said Sosanya.

"We wanted to give designers the ability to do this without leaving Gravity Sketch, to make their lives easier."

Matteo Gentile, an Italian car designer who had early access to the Surface Tool feature, said it provides "a huge bridge" for designers transitioning from 2D to 3D processes.

"The team has managed to transform paper sketching into digital 3D in a very natural way," said Gentile.

Automotive design is a key field for Gravity Sketch, which has been adopted by creative teams at Ford, among other major companies. Concept artists and product designers make up most of the rest of the user base.

Sosanya said his team had observed that design teams working with Gravity Sketch tended to use it between the 2D thumbnail sketching stage and CAD development in particular.

Instead of designers handing a 2D sketch to CAD technicians to convert into a 3D model, they would supply an IGES file that allows the digital exchange of information amongst CAD systems, exported from Gravity Sketch, meaning more of their initial design intent was preserved through the process. 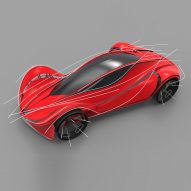 Sosanya told Dezeen the "character and emotion" of a creation remained in Gravity Sketch where it would otherwise be erased through the process of 3D modelling.

"With our 2D input mode using a Wacom tablet, each stroke is technically a piece of 3D geometry that can be manipulated and edited in 3D space," he said.

The hardware required is generally a high-performance PC and either an Oculus, HTC Vive or Windows Mixed Reality headset. It also works with Oculus Quest, a PC-free all-in-one VR product that can be a cheaper alternative for design offices that use Macs.

Sosanya told Dezeen that accessibility was a key issue, because the potential of VR in the design process wouldn't be fully realised until people had headsets at their desks.

"In many of the design studios we visited, VR was sort of an IT or innovation team initiative and as such was trapped in some strange location," said Sosanya, adding that it was usually "an empty dark room with a single computer, no atmosphere, and too much AC".

"Even for designers excited about the possibility of 3D sketching, many didn't want to leave their desks to spend a couple hours in a strange room far away from their lively inspiration-filled design studio."

He said he was currently working with two customers to set up their design studios with "VR at the Desk" and the headset as a "third monitor", which is how Gravity Sketch's own offices are set up.

Launched in 2017, Gravity Sketch's software was intended to make modelling 3D objects more accessible, as it requires none of the expertise typically related to CAD software.