Now available on Steam, the tool is intended to make 3D design more accessible for a wider audience, requiring none of the expertise that complex CAD software typically needs. It works via HTC Vive or Oculus Rift virtual reality headsets, through which users are presented with an empty environment that they can fill with models.

Gravity Sketch VR allows for free-hand drawing, but also has additional tools that lets surfaces and symmetry be manipulated, as well as control-point editing.

The virtual-reality environment allows users to change their models in three dimensions, easily shrinking and altering parts of them. Once designs are finished, they can then be transferred to CAD software for users to work with further.

A beta version of Gravity Sketch VR was launched in January 2017, to give a small set of users a chance to test the software and provide feedback.

The team behind the software used the beta testing phase to focus particularly on vehicle and product design, and to further understand the physical side of prototyping, and how the software could support this.

"A great example of this is the curve surface tool, which was inspired by clay modelling in the automotive industry," said co-founder Oluwaseyi Sosanya, who developed the software in 2014 alongside several other Royal College of Art graduates.

"Sculptors will often use a thin piece of metal and bend it with both hands as they scrape clay across a surface to find form. We created our digital tool in the same manner using a virtual piece of metal and two-handed gesture, allowing users to extrude surfaces and manipulate them after," he told Dezeen.

Five hundred beta testers – from automotive designers to architects, animators and concept artists – have provided feedback on the software. The Gravity Sketch team chose professions that rely heavily on creating 3D models, and use existing design tools on a regular basis.

The team found product and car designers used Gravity Sketch VR for much of the design process, exporting files only to render them, while architects used the tool to lay out proportions and volume.

"VR hasn't reached many design studios due to the lack of VR hardware and software," said Sosanya. "When this hardware fully penetrates the industry, immersive design is bound to become an agent of change in workflows."

"We really saw how potentially disruptive this tool could be in terms of people completely doing away with a 2D workflow altogether, and starting off with concept sketches directly in 3D, in VR."

"There has been loads of effort put into creating hardware that allows for a more human touch, but nothing has really taken off or has come close to eclipsing the mouse," he added. "What AR and VR allows is the complete removal of the perspective interpretation our brains must do when we work in 3D through paper and 2D screens."

Gravity Sketch is also working on professional and enterprise versions of the software based on the beta testing feedback, which will have extra features tailored towards the end user.

The professional version will allow users to export design files into other software, and include advanced settings for importing content, editing the environment, as well as precision snapping, scaling and movement of geometry within the tool.

Enterprise versions will have the same features as the professional version, however Gravity Sketch plans to work closely with companies to understand their own workflow needs, and tailor the tool accordingly. 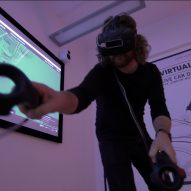 London studio Seymourpowell has also created a virtual reality tool aimed at automotive design, and VRtisan has also claimed to be developing VR software that lets architects creating buildings in 3D space around them.