The University of Stuttgart has continued its experiments into biomimicry and robotic construction with two pavilions at the Bundesgartenschau horticultural show in Germany.

Both of the pavilions are built by robots and are designed to imitate nature – known as biomimicry. A sweeping wooden pavilion has a shape based on sea urchins, while a fibre-composite pavilion takes its structure from beetle wings.

Researchers from the university built the BUGA Wood Pavilion from 376 unique plate segments that fit together like a jigsaw, with sub-millimetre precision.

The structure is based on the shell of sea urchins — something Stuttgart's Institute for Computational Design and Construction (ICD) and the Institute for Building Structures and Structural Design (ITKE) have been studying for almost a decade.

Urchins have a distinctive skeleton made up of tightly interlocking plates, and the research groups have drawn on this repeatedly to build the likes of a small pavilion in 2011 and a stitched-together version in 2016.

For this iteration, the team wanted to outdo a direct precursor to this project — the Landesgartenschau Exhibition Hall from 2014, in which they'd interpreted the urchin morphology through finger joints.

Their goal was to use the same small amount of wood per square metre,† but to triple the span of the pavilion. They also wanted to make it reusable.

The latest pavilion, on display at Bundesgartenschau in Heilbronn, Germany, spans 30 metres column-free. It weighs just 38 kilograms per metre squared — the result of using hollow wooden cases designed by computers.

"A biomimetic approach in architecture enables scientific, interdisciplinary lateral thinking," added ICD's Achim Menges. "At the overlap with digital technologies, surprising new construction methods can emerge, such as the robot-made, segmented wooden shell of the pavilion." 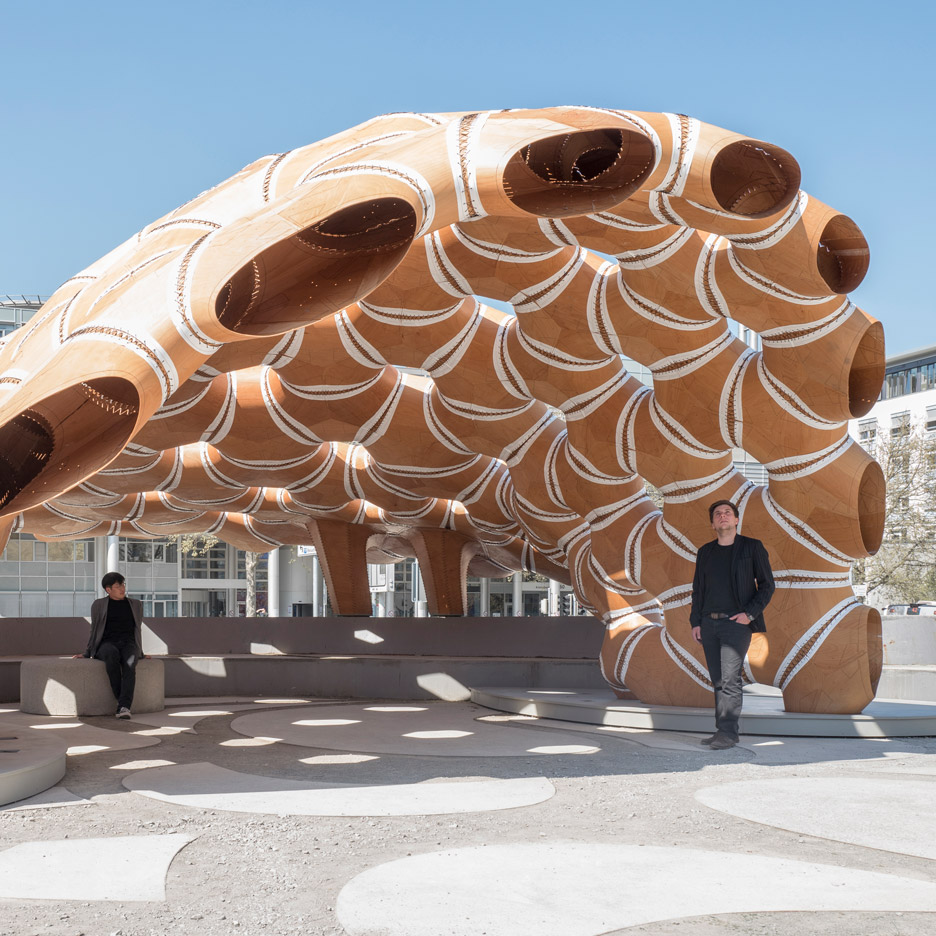 The team designed a bespoke robotic fabrication platform for the Buga Wood Pavilion, with two industrial robots gluing plates together and machining their 17,000 finger joints to 0.3-millimetre accuracy. Assembly on site took human labour in the form of two craftspeople working for ten days.

"Instead of simple but solid wooden components, the fully automated manufacturing process developed by us allows the realisation of complex yet highly material-efficient and lightweight wooden cassettes," said Menges. "They also lend the pavilion its characteristic architectural appearance."

The BUGA Wood Pavilion is on display alongside a second pavilion – the BUGA Fibre Pavilion. This structure continues the ITKE and ICD's work on woven fibre structures, such as their 2016 Elytra Filament Pavilion at London's V&A.

Instead of the bodies of sea urchins, these structures take their inspiration from another naturally strong animal body part — beetle wings.

There is also a second layer of biomimicry in the very use of fibre composite as a building material — as the research team points out, most load-bearing structures in biology are composites of fibres such as cellulose, chitin or collagen.

For the Bundesgartenschau pavilion, the team used glass- and carbon-fibre-reinforced plastics, which they say share key characteristics with natural composites.

Again, the pavilion segments are built by two robots — in this case, University of Stuttgart-developed filament winding robots, each placing fibrous filaments in between two rotating scaffolds.

In this approach, which can be considered a form of additive manufacturing like 3D printing, there is no need for a mould or core, and therefore no production waste or material offcuts.

The translucent fibres are glass composites, while the black ones contain carbon-fibre for structural advantage, and the whole pavilion is enclosed by an additional plastic membrane.

"This highly innovative construction method is far ahead of existing building regulations," said Knippers. "The weight of the pavilion's structure is many times lower than that of comparable steel or wooden structures," he continued. "This makes the assembly much easier, as there is no need for heavy means of transport, scaffolding or lifting equipment."

The BUGA Fibre Pavilion is on display on the Summer Island of the Bundesgartenschau, along with the BUGA Wood Pavilion, until 6 October 2019.