Carmody Groarke has refurbished the British Film Institute's home on the South Bank in London, with an illuminated new entrance canopy and revamped interior.

The new riverfront entrance is designed to draw greater attention to the BFI Southbank's restaurant, bar and cinemas under Waterloo Bridge.

Carmody Groarke added a large entrance canopy to the building, which stretches the entire width of the bridge and cantilevers out from under it at either end.

"This transformation has revitalised the BFI's identity, which has recessed in recent years, and increased the visibility of the BFI's offer, proudly reconfirming its place as one of the national cultural institutions on the South Bank," said the studio.

According to the studio, the new entrance to the heritage-listed building takes its design cues from the original National Film Theatre, which opened on the South Bank in 1957, along with traditional cinema signage.

"This lateral pavilion, which echoes the look of a classic illuminated cinema top sign, not only radically improves the visibility of BFI Southbank but also creates a new elevated public terrace from which to view the South Bank," said Carmody Groarke.

Made from cast fibreglass, the canopy can be illuminated at night to further increase the building's visibility. It can be programmed to change colour depending on the films showing in the cinemas.

Below the canopy, BFI Southbank's restaurant and bar open out onto the street through large sliding doors.

Both the restaurant and bar have been fully refurbished, with a circular oculus cut at the centre of the space to give views of the underside of the bridge. 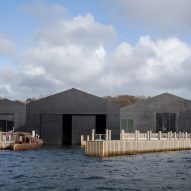 Carmody Groarke completes boat museum on the shore of Windermere

On the first floor, the back-of-house offices have been removed to make way for a large events space, which sits directly beneath the concrete structure of Waterloo Bridge.

This event space opens out onto a balcony that has been built into the entrance canopy.

Carmody Groarke hope that the renovation will reestablish the BFI as one of the major cultural buildings on the South Bank.

"By reflecting the BFI's position as the UK's lead organisation for film and television, home of the national collection and one of the country's most prominent arts institutions, the refurbishment sets out to create a distinctive place that is a vital part of the South Bank's vibrant surroundings, whilst also re-establishing its relationship with the bridge and creating a stronger connection with the riverside," explained the studio.

BFI Southbank is one of several cultural buildings built on the south bank of the River Thames during, or following, the Festival of Britain in 1951.

Original named the National Film Theatre, it occupied a temporary building during the festival before finding a permanent home under Waterloo Bridge – between the National Theatre and Southbank Centre – in 1957. Following an enlargement and renovation in 2007, it was renamed BFI Southbank.

London-based Carmody Groarke was founded in 2006 by Kevin Carmody and Andy Groarke. The practice has previously renovated the Members' Room at the V&A and a boat museum on the shore of Windermere.

Photography is by Luke Hayes, unless stated.