An exhibition of cork furniture by Jasper Morrison has opened at the Kasmin in New York's Chelsea, the designer's first solo show in North America.

Called Corks, the show brings together items of furniture by the London-based designer that are all realised entirely in cork.

Items on display include a chaise longue, bookshelves, a dining table, chairs, stools that double as low tables, a bench and a cork fireplace surround.

The pieces are cut from cork block material left over from wine bottle cork stopper production.

The particular cork block that Morrison has chosen is distinctive for the fact that wine corks are visible across its surface once the pieces are machined.

"Developed by the cork oak tree as a protective covering, this particular iteration of the material is reconstituted from unselected wine bottle corks, some still visible in their original shape," said Kasmin.

An area of the gallery space has been configured as a domestic setting, with chairs arranged around both the dining table and a low stool.

Here, the walls have been painted a deep green with free-hand depictions of the furniture items and their dimensions outlined in white at various points.

On the other side of the space, a series of stools, a chair and a bench are arranged on a raised L-shaped white display, in a more conventional gallery setting. 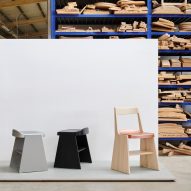 Morrison has previously worked with cork, including on a hut for Muji that was presented at Tokyo Design Week in 2015. Prior to that he made a trio of lightweight stools for Vitra from the material.

Kasmin explained that the designer was interested to explore the material's functional quality.

"Morrison's interest in cork stems from its remarkable functionality as well as its unique atmospheric qualities, which he recognises as a key design component of an object's long-term success," explained the gallery.

Morrison has worked with a variety of furniture brands including Cappellini, Mattiazzi, Emeco and Maruni. He has even turned his hand to designing soap and book ends for Penguin.

"As limited editions, these pieces mark a departure from the designer's usual methods of industrial production and initiate a new collaborative partnership that speaks to Kasmin's continued engagement with presenting boundary-pushing work at the intersection of art and design," said the gallery.

Kasmin announced last month that it would begin representing Morrison in the US. Founded by Paul Kasmin, the gallery operates at three exhibition spaces and a sculpture garden in New York.

Corks is on show at the space until 28 June.