Researchers at MIT and in the Maldives have come up with a solution to help coastal communities threatened by climate change: submersible objects carefully placed to promote the growth of beaches and islands.

The Growing Islands project is the work of Massachusetts Institute of Technology's Self-Assembly Lab and Maldivian organisation Invena, who came together to explore how design could stop coastal erosion and sea-level rise — two problems associated with increasing global temperatures.

MIT's Self-Assembly Lab typically produces objects that build themselves, such as inflatables with multiple final forms. These structures respond differently depending on the amount of air pressure inside, thanks to the intricate geometries 3D printed in their interior.

The Self-Assembly Lab has been eager to see if these computational design approaches could work on a more macro level.

"For a long time I've thought 'isn't there a way that we could utilise some of the energy that's just naturally around us in disasters — you know earthquakes, tornadoes, landslides, tsunamis — and do something productive'," Self-Assembly Lab head Skylar Tibbits told Dezeen.

"Couldn't we use that to design and build rather than destroy?," he continued.

From that initial impetus the team came to focus on wave energy. Invited to the Maldives by Invena, they noted that sandbars, shaped by waves, grow rapidly and follow a predictable pattern.

They thought that if they could analyse this pattern and replicate it, they might be able to strategically control the sandbar growth. In effect, they would make self-growing sandbars, islands and beaches.

After experimenting with variously shaped submerged objects and wave patterns in a tank in their lab, the group took their work into the field in February, sinking several three-by-three-metre structures off the Maldivian coast.

The structures are large bladders, sewn out of canvas and biodegradable material and filled with sand. The researchers say they are low-cost, easy to deploy, adaptable and work with nature rather than fighting against it. 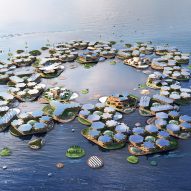 The group will continue to observe the results and run more field tests over the coming years.

While the title of the project is Growing Islands, the objects actually have three distinct potential uses: the first is to construct all-new islands. The second and third Tibbits says are probably more immediately relevant: supporting existing islands and beaches.

About 40 per cent of the world's population is thought to live in coastal areas, which are threatened by erosion, rising lea levels and storm activity heightened by climate change.

One of the current antidotes to this is the building of artificial reefs, which works on similar principles as the Growing Islands project but employs less precision and more man-made materials.

Tibbits also says the Self-Assembly Lab's proposal is many times better than dredging, where sand is dug out from one section of the ocean and moved to another.

This is the current process for building artificial islands, but it is energy intensive, can negatively impact marine ecosystems and requires frequent attention to stop deposits washing away.

"We want to let structures grow and emerge and build themselves by using wave energy or natural materials, found materials and simple forces in the environment," said Tibbits.

"We think it's a more elegant solution or a more sustainable approach to building than manmade fixed infrastructure."

Several artificial island projects are currently in development around the world, including what is set to be one of the world's largest in Hong Kong and a network of nine joined together into a tech hub outside of Copenhagen.