Citroën's vision for the future of intercity travel is a fully electric and autonomous "living room on wheels", which takes cues from aviation design.

The 19_19 concept marks the French automotive brand's 100th anniversary, and is designed as a long-range companion to the ultra-compact Ami One city car concept revealed earlier this year.

Informed by aviation design, the streamlined 19_19 car body resembles the fuselage of an aircraft and the transparent "bubble" of a helicopter.

The fully-glazed suspended cabin is supported by Citroen's Progressive Hydraulic Cushion suspension, which makes the body appear as if it is "levitating" above the four oversized wheels.

This system allows the wheels to move relative to the cabin, eliminating the sensation of bumps to offer a "magic carpet ride" experience.

Developed in collaboration with Goodyear, the oversized 30-inch wheels boast a porous texture that absorbs impact and reduces noise like a "natural sponge".

Each tyre uses embedded smart sensors to communicate road conditions to the car when driving in autonomous mode.

A fully electric powertrain with a range of up to 800 kilometres also heightens the feeling of being "in a bubble" by minimising noise, whilst reducing the vehicle's carbon footprint. Quick charging technology also enables the car to reach 600 kilometres of range from just 20 minutes of charge.

Designed to offer "ultra-comfort" while helping passengers escape from the city, the 19_19 concept car features a "cocoon-like" cabin that acts as an extension of the rider's home, described as a "living room on wheels".

To echo the living room, each of the seats in the cabin offers a different postural position, mimicking the form of a sofa, ottomans and armchairs, according to the desires of the passenger.

The front passenger seat, for instance, is designed to emulate a chaise longue, offering the comfort of a business-class seat on a long-haul flight with its reclined stance and plush texture.

The 19_19 concept is also equipped with an artificial-intelligence-powered personal assistant built in to the dashboard, which controls the vehicle when in autonomous mode, and interacts unprompted with passengers via a predictive system that anticipates the needs of each occupant.

A black panel on the side of the car serves as a user interface for other people and cars approaching the vehicle.

The 19_19 can detect its driver, and uses this panel to welcome them by displaying animated graphic messages.

Two Light Detection and Ranging (LiDAR) laser-detection sensors positioned at the rear of the roof are used to detect the car's surroundings, designed to deliberately stand out to resemble a twin tailplane. 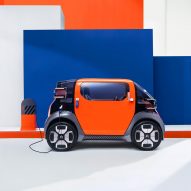 "With 19_19 Concept, we sought to rewrite the automotive rule book with a high-impact vehicle featuring a strong and powerful design inspired by the world of aviation," said Citroën's head of design Pierre Leclercq.

"As an aerodynamic and technological comfort bubble floating above the road, 19_19 Concept showcases details like the new-generation light signatures, the aerodynamic appendices and the wheels developed by Goodyear," he added.

The vivid, electric blue colour of the car draws on Citröen's heritage, chosen as a nod to the brand's original Petite Rosalie model – a lightweight racing car from the 1930s.

The 19_19 concept car will make its debut at the VivaTech event in Paris on 16 May this year.

Citröen revealed its Ami One concept at the 2019 Geneva Motor Show back in March, where visitors could test drive the vehicle designed to be an alternative to both shared bikes and cars.

Other designs at the annual motor show included Bugatti's one-off supercar made from carbon fibre, which was sold to an anonymous enthusiast for a price of €11 million.