The exhibition takes a wide-ranging approach to the topic of artificial intelligence, with immersive and interactive displays spread throughout the brutalist cultural centre.

As well as showcasing recent research projects out of innovation hubs like MIT, it incorporates historical artefacts such as a world war two-era Enigma Machine.

These sit alongside snippets from influential cultural products like Bladerunner and Frankenstein, and contemporary artworks with something to say about the intersection of nature and technology.

"Artificial intelligence is a key marker of the zeitgeist and we are thrilled to be exploring the subject, both as a motive for scientific progress and a stimulus for creativity," said BIE head Neil McConnon.

The main exhibition is installed in The Curve gallery. It opens with a look at the golem figure from Judaism and the concept of animism — the attribution of a living soul to everything around us, even inanimate objects — from the Shinto faith.

This is part of a section called The Dream of AI, which also looks at early experiments in alchemy, and asks the audience to consider how human history might have primed the ground for our current relationship with technology.

The next section is called Mind Machines and focuses on early innovations in AI stretching back to the 1800s. It looks at Charles Babbage's Analytical Engine and Ada Lovelace, often considered the first computer programmer.

Alan Turing and the codebreakers of Bletchley Park, IBM's chess-playing computer Deep Blue, robots like MIT's swimming SoFi and chatbots such as Mitsuku also feature in this part of the exhibition.

Data Worlds follows, which explores how artificial intelligence can help us improve aspects of our lives such as road safety, medical diagnostics and city planning through the likes of the Kreyon City project by Sony Computer Science Laboratories.

This allows visitors to build a city out of Lego — with one eye on their citizens' projected quality of life.

This section also includes more dystopian aspects, such as the University of Washington's Synthesizing Obama "deep fake" video, which shows the former US president saying things he hasn't said.

Another theme here is the replication of human biases through limited data-sets, with Joy Buolamwini's work showing how often facial-recognition fails to recognise black faces.

Most of the large-scale, commissioned installations sit outside of the main exhibition, occupying other spaces in The Barbican. 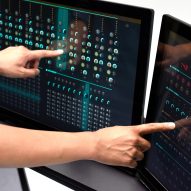 In The Pit theatre is TeamLab's interactive digital installation What a Loving and Beautiful World, a calming environment populated by butterflies and Chinese letterforms.

In the foyer is Es Devlin's PoemPortraits, created with Google Arts and Culture, where visitors can contribute a word and have AI weave it into a cumulative, collaborative poem.

Nearby is Lawrence Lek's playable 2065, created for a speculative future where we spend all day playing video games, and Yuri Suzuki's Electronium, where visitors can compose with AI.

There's also Universal Everything's interactive Future You, which will evolve throughout the exhibition by learning from visitors' movements, Chris Salter's ceiling-high digital Totem and Certain Measures' A Machine View of London video work mapping one million buildings in London.

Museums around the world are exploring themes of technology, robotics and the future — including, recently, fellow London institution the V&A with The Future Starts Here — but The Barbican's may be the biggest and most ambitious attempt to date.

BIE worked with guest curators Suzanne Livingston and Maholo Uchida on the exhibition, which will tour after it finishes its run at The Barbican. BIE's previous exhibition, 2017's Into the Unknown: A Journey Through Science Fiction, is still touring.

AI: More Than Human opens at The Barbican today and runs until 26 August 2019.