The Synthetic Apiary takes up an entire room and offers precise control of light, humidity and temperature to replicate the ideal environment for bees to survive and produce honey.

The colony is provided with synthetic pollen and sugar water, and its health is constantly monitored.

The apiary's perpetual warmth tricks the insects into thinking it's spring throughout the year, meaning the colony remains active and producing honey.

Outside of the apiary, hives of honey bees typically reduce in number as the weather cools, with the remaining insects surviving on honey stored during summer.

The team has described the experiment as "the first demonstration of sustainable life in a completely synthetic environment."

The research could help to create a sustainable environment for bees, which in recent years have been reported to be disappearing.

Rather than locating the apiary outside, where hives are typically housed, MIT converted part of a building into a new home for the bees.

This allowed them to investigate bee behaviour and control the queen's biological clock to induce egg laying.

The apiary is MIT's first attempt at integrating hives into buildings in this way. Its long-term goals include developing new ways of allowing bees and humans to co-habit, and creating further understanding of the factors that influence hive building and structure.

"Honey bees are ideal model organisms because of the historical interplay between their communities and humans," the team explained.

"Bees, as agents of cross-pollination, are an essential part of our agricultural production; without them, we would not have the fruits and vegetables that nourish our lives."

The apiary also addresses the declining numbers of bees around the world, with several species now listed as protected under the Endangered Species Act of 1973.

The Mediated Matter group has previously researched how silkworms and robots could work together to produce structures, using the process to create a dome of silk fibres.

Italian designer Francesco Faccin similarly sought to protect bees, designing a hive that maintains a constant temperature and shelters inhabitants from bad weather, while Norwegian studio Snøhetta created wooden apiaries to encourage bees to take up residence on the roof of an Oslo roof court. 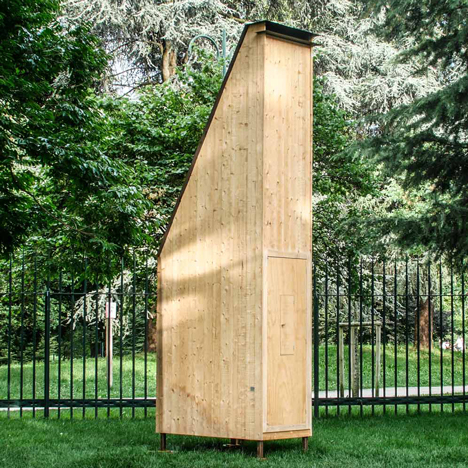