Designers of New York collective Colony have collaborated with artists of their choosing to create one-of-a-kind pieces for this exhibition during NYCxDesign.

Colony is a design collective that was founded by trend forecaster Jean Lin in 2014. Each year for the annual NYCxDesign festival, it hosts a themed exhibit in its Lower Manhattan space.

For its latest showcase, Pas de Deux, Lin tasked designers to collaborate with artists for pieces in the installation.

"This year, I thought why not put a little bit of the curation back into the hands of the designers?," Lin told Dezeen.

"That is such a great trend that is happening right now, where there are designers who are also acting as curators, so that was the impetus of the theme, and it grew from there," she said.

Fourteen American designers from Colony's collective collaborated with artists for their individual pieces. Some artists gave a personal touch to the objects, while others made works that are placed in tandem with existing designs.

There is no connecting thread for the works showcased. Instead, the collaborations feature a diverse array of talent, from textiles to choreography and painting.

"I've always said that I curate designers rather than pieces," said Lin.

"It puts a lot of trust initially in the designers and their eye, and their design-vernacular that they've established in their studios over the years," she continued. "This was just an extension of that." 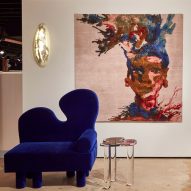 Among designs on display throughout Colony's white-washed, warehouse space are painted chairs, consoles and woolly tapestries.

At the centre are two pale upholstered chairs designed by Paolo Ferrari. One has fringe on the back, created by New York-based Hiroko Takeda.

Both Takeda and Ferrari, who is based in Toronto, and have been members of Colony for years.

"That [collaboration] was kind of a dream one because it was all in the family," Lin said.

Takeda has also created two woven textiles that are draped from the ceiling. In the exhibit, these are teamed with a letter scribed by a young whaler in 1892.

At the front of the gallery's windows are wooden Tombstone chairs by Fort Standard that have been painted by American illustrator Ty Williams. Gregory Buntain's Fort Standard and Williams are old friends.

The partnerships have also seen an aluminium chair designed by Klein Agency, reimagined with painting from Nicolai Sclater of Ornamental Conifer.

A dark wood Mesa console by Katrina Vonnegut and Brian Kraft of Brooklyn studio Vonnegut/Kraft that anchors the middle of Colony is decorated by two hand moulds by Aine Vonnegut – one of Brian's family members.

Other designers present more unusual pairings. Quilter Meg Callahan, for example, has teamed two of her large blankets with a video screening of contemporary dance, projected onto an adjacent wall and to be representative of the repetitive movement in her own work.

"That's part of the reason why I thought this theme was so exciting," Lin said. "I didn't know what they were going to come up with."

Additional works on show include a pale wooden credenza by KWH, a technicolour round mirror by Hidenori Ishii, and a knot sculpture by furniture designer Ben Erickson, which is displayed beside a purple artwork by Matthew Kirk.

Adding depth and sound to the space is a custom soundtrack paired with hundreds of opaque tapestries that ripple and flow overhead. Artists Dmitri Cherniak, Iain Nash and Jasper Lin created the kinetic sound installation for the exhibit.

Pas de Deux at Colony is on display from 16 May to 31 May 2019, at 324 Canal Street, and part of NYCxDesign. Also on display is a kinetic installation by Studio INI at Brooklyn's A/D/O and a light showcase by Snarkitecture in Manhattan's Meatpacking area.