This immersive installation in Brooklyn's Greenpoint, created by designer and engineer Nassia Inglessis, features a canopy that appears to magically move up and down as visitors tread underneath.

Urban Imprint comprises a floor and ceiling that change shape in response to movement, and was created by the Greek designer's firm Studio INI in response to a brief from MINI-backed A/D/O to explore the notion of personal identities in cities.

Unveiled today for this year's NYCxDesign week, the design is intended to invert the typical relationship between people and the urban environment. Instead of people reacting to built forms, the structure adapts to them.

To create the morphing effect, Inglessis has connected the floor and the ceiling with a pulley system, comprising 400 chords that are hidden behind a mirrored screen at the back of the structure. As visitors step on the platform, it dips down and triggers the pulleys to tighten and lift the roof into a dome shape.

Inglessis likens the system to a musical instrument. "It's like a large harp," she said.

The thicknesses of the pulleys translating the changes in tension in these chords are varied so that the protrusion in the ceiling exaggerates the size of the imprint in the floor.

"The ratio of the different radii of the different pulleys allows that translation to be multiplied by four," Inglessis added. "It pulls up the ceiling in the same way, mirroring exactly every step that you make and shift of weight that you create to open up and shift in form and colour and in light, at the same time."

The leather-like skin is made from a mixture of rubber and concrete and is coloured dark red, picking up on the hues of the brick walls that encase A/D/O's yard. The material is water-jet cut with markings that form a honeycomb pattern and make it supple enough to move. The punctures also allow natural light to filter through. 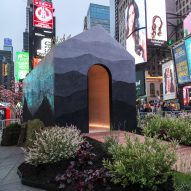 10 must-see installations and exhibits at NYCxDesign 2019

While the roof is held up by the chords, the floor is laid atop spring steel, which the team has laser-cut into a custom swirling pattern to allow it deform in three ways to create a dip shape. Walking on the spongey platform is similar to the sensation of treading on a trampoline.

Based in Athens and London, Inglessis established Studio INI in 2015 with the intention to use computational and digital tools to improve human interaction and experience. The studio designed the Greek pavilion for the 2018 London Biennial, which similarly shifted shape in response to movement.

"We have such great capacity for digital tools, computational design, but instead of using it for the purpose of simulating physical reality and slowly crawling towards a world where we live in a headset, I find it much more intriguing of how do we use these technologies to reconsider the physical way that we design," she said.

Urban Imprint will be open to the public from 17 May to 2 September at A/D/O, which is located inside an old warehouse that was transformed by New York studio nArchitects into a creative hub, restaurant and tech startup incubator.

The creative hub, which is backed by MINI, unveiled Urban Imprint to coincide with the annual NYCxDesign festival, taking place across the city from 10 to 22 May 2019. It marks the second in a series of installations for the citywide festival, and follows last year's Spirit of the City that featured rotating gold mirrors.

Photography is by Luke A Walker.