Celebrities attending the Met Gala not only misunderstood the concept of camp, but showed levels of waste that will lead to a backlash against displays of decadence, says Li Edelkoort.

With growing unease I witnessed the spectacle at the Metropolitan Museum of Art, the temple of culture as we once knew it. The displayed extravaganza, outdoing all other Met Galas in recent history, was of indescribable character, acting without restraint – a violent act of haughtiness, displaying a deep disdain for everybody else, for ordinary people.

The flow of famous individuals was endless in its useless vanity and uncertainty. Many great stars, visibly on edge for their act of great entrance, were seen shaky on their feet, babbling to their publicists, aggressing their stylists and clinging to their designers; desperately hunting for cameras to capture their image in order to merit their endorsement of a major piece of jewellery.

Walking back and forth like deer blinded by headlights, they gradually understood that their moment was wasted. And awkwardly joined the silent majority of those actually paying for the benefit – the grey haired, bespectacled, rather graceful and invisible one percent.

Silently, and heads bend so as not to be discovered. They looked like the empathic slaves to this ephemeral exposition consecrated to extreme narcissistic behaviour; paying penitence for their accumulated billions. To be appropriate they would nevertheless hire a curator of clothes in order to make their final choices, sometimes sending up to a hundred couture items to be sampled from. Having a debilitating amount of money doesn't make people more self-assured, it actually undermines ego.

The greatly misunderstood concept of camp as described by the great Susan Sontag was leading to cabaret, carnival and at best clownish styling, with canes, top hats and bare limbs in fish netting, all out for the big catch.

The knowledge and suaveness, even the innocence and joy of the underground movements as captured in Paris Is Burning and The Rocky Horror Show of my youth are terribly missed. The only convincing characters were the oldest actresses; they naturally looked to be cross-dressing.

As always shine, feathers, sequins and rhinestones are amongst the favourite ingredients for the night while organdie made its cameo appearance. Capes and trails and headdresses made for the key paraphernalia.

The deep lack of impeccable historic insight and curatorial delight displayed in this year's exhibition at the Costume Institute, called Camp: Notes on Fashion, was absent in the choices of the people present and made for shared public embarrassment. Makeup artists all followed the same lead by transforming eyelashes into petals, pine needles, plumes and more; the interest in female surrealism certainly being the major inspiration. The eye is on her. The only great person missing seemed to be Frida, holding court at the Brooklyn Museum, we did greatly miss discerning eyebrows.

The knowledge and suaveness, even the innocence and joy of the underground movements as captured in Paris Is Burning and The Rocky Horror Show of my youth are terribly missed

The resulting doll's eyes were magnified by the ever-active Lady Gaga who needed a full 20 minutes to do her entrance act in multiple chapters. After having shown her bare and beautiful self in her recent film it was an act of vaudeville that was executed in an embarrassing bad manner, a disturbing point in her career as a public icon. Difficult to comprehend, what lured her into revolving into her same old self?

Hesitation upon hesitation; not securing poses, not striding steps, not finding the pockets of her garment, not dealing with the gilded stroller for her oversized coordinated travel bags. I could just feel how she hated every minute of having to go back to a person she no longer incarnates.

I felt great empathy with her suffering. She even couldn't find the cameras, which is weird and unnerving for a chanteuse of her stature. As the star of stars didn't know how to enlarge her ego further how does this instruct society?

The display of waste was mesmerising and sickening, as in reaching and overstepping suddenly a limit

Her insane entrance cloak, made of fuchsia pink silk was using up enough fabric to dress twenty poor ravishing girls. The big black dress (oh how we regret the little one nowadays!) used enough fabric for an emerging talent to tailor his debut collection.

The display of waste was mesmerising and sickening, as in reaching and overstepping suddenly a limit. The same day the UN published a scientific survey that certified that because of human greed, excess, waste and abuse of our habitat we will lose one million species; animals, trees, plants and foods.

When the flush gates were opened and the vomiting waste of wealth gushed onto the pink carpet a violent sense of anger engulfed me, of a magnitude that I have never experienced. 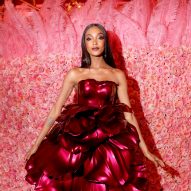 I am normally a peaceful and centered person. The amount of abundance displayed at this rare moment of dancing again around the golden cow, which should have been great for the city, the museum, the curator, the magazine and the editor-in-chief, suddenly turned into an overwhelming premonition of direct and impending danger. Even my vodka and cheese cracker couldn't kill the rage in me or crack me up with laughter. There was no humour to be found in any of the accoutrements.

Dressed in a virgin blue ruffled habit with a pink corsage, a trembling and at times skittish camera filmed a beautiful young actress named Lily Reinhart for minutes on end against a dense hay of fresh roses brought in for the evening.

Without any notice, and without hesitation, my mind time-travelled to Marie Antoinette as pictured by Fragonard and with a sudden deep sinking sense of doom reached the bottom of my being as I understood that this was the end of it.

The moment of reversal was coming, the tipping point was unavoidable, the beheading of culture irrevocable. Soon the maddening crowds of have-nots would seek out the haves with settling scores in mind. That history would repeat itself punishing not the walled-in lifestyle of the rich and famous, but castigating the incessant aggression of the indecent display of decadence in the public eye, a display that can no longer be contained by the people press selling these dreams.

In front of my university a man is making home with tons of debris, my students are starving, my artist friends have to steal food to survive, colleagues have not been rewarded since a decade, and Karl has displayed a yellow vest. Lagerfeld was forever leading and guiding us into the future. He decided to leave so as not to witness the massacre.

As the dolled up dream turned into an ever-greater nightmare of obvious condescendence I was cruelly confirmed in my haunting vision of the beheaded royals when Jared Leto walked in with his own severed head, potently and beautifully predicting our future.

Li Edelkoort is the dean of hybrid studies at the Parsons School of Design in New York. The Dutch trend forecaster advises numerous fashion companies and brands around the world. She was previously director of Design Academy Eindhoven from 1998 to 2008 and in 2011 she helped found School of Form in Poznan, Poland. In 2003, she was named one of the 25 most influential people in fashion by Time magazine. She is one of the judges for Dezeen Awards 2019.
Read more: