Sustainability experts have questioned the validity of The Ocean Cleanup, an initiative designed to scoop plastic waste from the Pacific Ocean.

"I'm not saying it's a hoax; rather [it's] a dream that seduced many people and donors," said Italian environmentalist and TV journalist Cristina Gabetti. "And we all fell for it."

"The science community is sceptical," she added.

He added that the media attention lavished on the project has drawn attention away from more viable attempts to stop plastic getting into the ocean in the first place. He described The Ocean Cleanup as "very bad for many real solutions worldwide".

System failed because it moved too slowly

The Ocean Cleanup aims eventually to remove 90 per cent of plastic waste from the world's oceans using giant U-shaped floating rigs. The non-profit organisation has raised $30 million in funding.

Doubts about the project emerged as the organisation published published an analysis of why its first rig failed at the start of this year.

In addition to a structural failure of its tubular plastic boom, it found that in some conditions the floating rig moved slower than the plastic it was trying to capture, meaning that items it had collected floated back out into the open sea.

"For the system to effectively retain plastic, it must consistently travel faster than the plastic," The Ocean Cleanup stated. "In other words, it must go faster." The organisation is now working to resolve the issue ahead of new trials later this year.

Collecting plastic from oceans "more complex than we imagine"

Speaking to Dezeen in Milan last month, Gabetti listed a number of concerns about the project, including the difficulty of bringing large amounts of plastic from the middle of the ocean back to the shore, and the problem of what to do with it afterwards.

"Collecting ocean plastic is more complex than we imagine, and if the challenge were to succeed we have to picture barges bringing the collected plastic to land, and getting [it] properly disposed of." 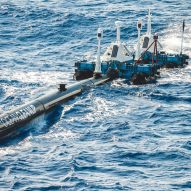 The Ocean Cleanup suspended as device breaks down in Pacific Ocean

"It's a soup more than an island [of floating debris]," she said, adding that calling it a garbage patch is a "huge semantic mistake".

Only three per cent of plastic on surface

The Great Pacific Garbage Patch is one of five major rotating gyres in the Earth's oceans where plastic accumulates. Located between Hawaii and California, it contains an estimated 1.8 trillion pieces of plastic and is twice the size of Texas.

However just three per cent of plastic in the oceans is thought to be floating on or near the surface, and trash that finds its way into the sea eventually breaks up into particles of just a few millimetres in length.

Founded by young Dutch entrepreneur Boyan Slat in 2013, The Ocean Cleanup describes itself as "the largest cleanup in history" and has made bold claims about its ability to rid the oceans of plastic.

"Our models indicate that a full-scale system roll-out could clean up 50 per cent of the Great Pacific Garbage Patch in five years," its website states.

"After fleets of systems are deployed into every ocean gyre, combined with source reduction, The Ocean Cleanup projects to be able to remove 90 per cent of ocean plastic by 2040."

The organisation has designed 600-metre-long plastic barriers designed to passively gather plastic as they float around in the ocean gyres where trash accumulates. The first System 001 rig was launched in September 2018 but withdrawn a few months later when it broke.

The rigs are made up of floating booms made of high-density polyethylene tube, with three-metre-deep skirts of woven polyester hanging beneath it.

Powered by ocean currents and winds, the rigs are intended to collect and retain plastic as they move around, with the skirts trapping particles floating below the surface.

In 2015 the project was nominated for the London Design Museum's Designs of the Year prize, while Time magazine named it one of the 25 best inventions of the year.

However Huang of Miniwiz, founder and CEO of circular-economy engineering company Miniwiz, said the concept was flawed.

"Any net or basket can collect any type of debris in water," Huang said. "The issue is how much can we collect? Is it even remotely logical to build a football-stadium-size floating fishing net to collect three pieces of three-gram plastic almost 50 metres away from each other floating dynamically under the influence of currents in three dimensions?"

Other solutions could have "way more impact"

Huang added that the $30 million raised by The Ocean Cleanup could be put to better use.

"Scooping out trash in ocean is good so the project could never be declared a failure conceptually," he said."[But] we could use $30 million and install a series of fishing nets to trap trash from going into the ocean in any polluted river in China."

"That will have way more impact and collect way more ocean trash." 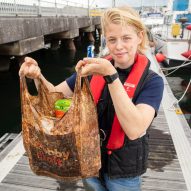 Huang said the media had hyped the project, diverting attention from less glamorous projects aimed at stopping plastic from entering the ocean in the first place.

"Media bought into and gave it fuel," he said. "This is very bad for many real solutions worldwide."

Huang added: "We all want a project like this to work but with a little research you realise this cannot be a plausible solution."

Gabetti and Huang spoke to Dezeen during Milan design week, where they both judged the Ro Plastic Prize for recycled plastic design.

In March this year The Ocean Cleanup published an analysis of the first deployment of the plastic-collecting system, which was aborted at the start of the year after structural failure.

As well as suffering a break in its boom, The Ocean Cleanup found that its System 001 rig was not retaining the plastic it had collected.

"Once the system was deployed and configured in the Great Pacific Garbage Patch, it was soon observed that the plastic that had accumulated within the system was not remaining inside of it," The Ocean Cleanup reported.

Once fully operational, the system needs to retain captured plastic for weeks or even months, since trips by ships to collect the waste will be infrequent.

However, "the plastic count within the system did not remain high enough for an efficient extraction process," the report stated.

This was due to plastic moving faster through the water than the U-shaped collection rig in windy conditions, the analysis found, meaning that collected plastic was floating back out into the ocean.

"Not only was the system then moving too slow, but the plastic was also moving faster than we had predicted," it said. "For the system to effectively retain plastic, it must consistently travel faster than the plastic; in other words, it must go faster."

The Ocean Cleanup working on solution

A spokesperson for The Ocean Cleanup told Dezeen that the organisation was working on a solution. "We now have all hands on deck and aim to be ready for relaunch within a matter of months," she said.

In response to concerns raised by Gabetti and Huang, the spokesperson said that 92 per cent of the mass of plastic in the gyre consisted of large pieces of waste.

"As it degrades over time, in the long term, this material has the potential to increase levels of microplastics by 30-fold to a staggering total of around 50 trillion particles," she said.

"Therefore it is important to get out there as soon as possible to clean it up, before the plastic held up in the mass will break down into more dangerous and difficult-to-clean-up microplastics."