The Imperial War Museum has a new archive in Cambridgeshire, England, called the IWM Paper Store, which is the most airtight building in the world.

The IWM Paper Store in Duxford was designed by sustainability specialist Architype to hold the museum's most sensitive collections and records.

The building is designed to passivhaus standards, so it has an extremely low ecological footprint.

Passive building technologies – ensuring the building uses almost no energy for heating or cooling – help it achieve its high environmental standards. These technologies help to preserve the building's sensitive contents while also reducing its running costs.

The archive's simple box-like form is designed to look modern, while complementing the colour of the bricks of the existing buildings on the airfield site, many of which date from the first world war.

Its facade is made from full-height weathering-steel panels, with a single panel representing each year since 1914, when the Imperial War Museum's collection begins.

Perforations in the panels denote the volume and quantity of material in the collection from each year.

This creates a broad visual timeline, with the panels representing years with high levels of conflict much more heavily perforated than those of relative peace.

Architype chose the material as it aligns with the building's programme as an archive to record conflict. 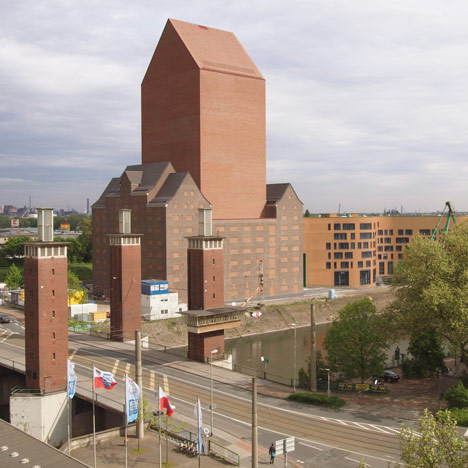 "The material sacrifices its outer layer to protect the main body of the material, this can be seen as having parallels with conflict, the main focus of the Imperial War Museum's work."

The archive has achieved the world record result for an airtightness test, according to the records held by the International Passivhaus Association.

Though a combination of insulation and other passive construction methods, the structure has an extremely stable internal environment that doesn't rely on large amounts of mechanical cooling or heating.

"Typically collections facilities are very expensive to run because they rely on constant artificial heating and cooling systems that run all the time – so gas heating and electric air-conditioning as well as multiple building services and de-humidifiers that keep this monitored and optimised," Taylor told Dezeen.

"Using passive techniques with very low air changes enables total constant control without any chance of rapid change. Even if temperatures change externally, our modelling and monitoring of other archives projects shows that internal conditions stay within tolerance levels all year round."

Based in the English town of Hereford, Architype specialises in creating sustainable buildings. This is the second passivhaus archive it has completed.

Other recently completed storage facilities include Reiach and Hall's archive of British civil nuclear industry, which was named Scotland's best building last year and the Qatar National Archive, which was designed by Allies and Morrison to reference traditional coastal watchtowers.