A 1950s dwelling that is one of the Usonian homes that Frank Lloyd Wright designed for middle-class residents has been moved from its original site in Minnesota to a private estate located near Fallingwater.

The RW Lindholm House – often referred to as Mäntylä, which is Finnish for "house among the pines" – was built in 1952 in the small town of Cloquet in northeastern Minnesota.

The residence was designed for businessman Ray Lindholm and his wife Emmy, and is an example of one of Wright's late-period Usonian homes, which were created for middle-class families starting in the 1930s during the Great Depression.

Standard dimensional lumber was used for rafters, while cypress was used for window frames and built-in cabinetry.

The clients' grandson, Peter McKinney, and his wife Julene ended up with the Lindholm House, where they lived for many years. In 2016, they began working with the Chicago-based Frank Lloyd Wright Building Conservancy to figure out how to ensure the home's longevity.

Its secluded setting had changed significantly over the decades, with commercial development now dominating the area.

"The Conservancy worked with the McKinneys to market the house to potential buyers who would keep the house on its original site, which had become encroached by burgeoning retail development along a brightly lit and noisy commercial strip," the Conservancy said in a statement.

The house was put up for sale, but there were no suitable takers. The McKinneys decided to donate the house to the Usonian Preservation, an organisation that owns a 130-acre (53-hectare) estate in Acme, Pennsylvania, called Polymath Park.

Barbara Gordon, executive director of the Conservancy, said relocating the house to the Pennsylvania property was the best option.

"The Conservancy has long disfavoured moving a Wright house unless its demolition is imminent or its site becomes so compromised that it is unmarketable," she said in statement. "The McKinneys and the Conservancy concluded that there was no viable long-term future for the house as a residence on its once secluded, wooded site."

The Lindholm House was deconstructed in April and May of 2016. The concrete blocks, concrete floor slab and roof rafters were demolished, but the rest of the dwelling was packed into trailers.

The components then travelled over 1,000 miles (1,609 kilometres) to the home's new location. Reconstruction of the building was completed in April.

The house will be protected under a preservation easement and will be monitored by the Conservancy. Archival material and copies of original drawings will be stored at the house.

The wooded Polymath Park estate has another relocated Wright dwelling – the Duncan House, which dates to 1957 – and two homes by American architect Peter Berndtson, who apprenticed under Wright. Overnight lodging and tours are available at the park.

Wright's iconic Fallingwater house is about 20 miles (32 kilometres) to the south.

The Lindholms were reportedly so pleased with their home that they commissioned Wright to also design a gas station for their town. Built in 1958, the Lindholm Oil Company Service Station is still in use.

While giving up the historic dwelling of their ancestors wasn't easy, the McKinneys said ultimately it was the right choice. 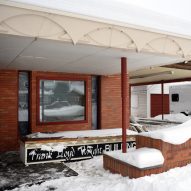 "The decision to relocate the house was a very difficult one for us," said Peter McKinney in a statement. "The house has been in our family for over 60 years and our son, David, grew up there," he added. The three of us believe this solution is best for the long-term survival of the house."

There are hundreds of Wright-designed houses still standing in the United States. Some of his most seminal domestic projects include the Hollyhock House in Los Angeles, which was influenced by seventh-century Mayan temples, and the Robie House in Chicago, which is emblematic of Wright's Prairie style architecture.

Not all of Wright's projects, domestic or otherwise, are spared the wrecking ball. In early 2018, the architect's Lockridge Medical Clinic in Whitefish, Montana, was razed to make way for a mixed-use development. It was the first intact Wright building to be destroyed in over 40 years.