Architecture and design studio T Sakhi has transformed security barriers into seating as part of a series of urban interventions aimed at creating social places for locals in Beirut.

This resulted in two interventions, Lost in Translation and Holidays in the Sun, that both provide places to sit down in the city.

Lebanon's current political instability has contributed to an abundance of unfinished construction projects and security infrastructure scattered across its urban environment.

As a consequence, there are few attractive places where people can gather and enjoy spending time outdoors, as Dezeen reported from Beirut Design Week last year.

"Most public spaces in Beirut are privatised, so the only real public spaces are the streets," claimed the sisters, who work out of Beirut and Milan.

"The city centre is filled with security and military barricades to control the area, so as a citizen and a pedestrian you don't feel the freedom, joy and happiness you generally experience in public spaces and gardens abroad."

The various security barriers are unsightly and have negative connotations, which T Sakhi aimed to reverse by giving them an alternative and more civic purpose.

Tessa and Tara describe the output of their studio as "hybrid works that are often playfully subversive and provoke new modes of human interaction".

The two experimental interventions they introduced in Beirut use objects that form part of the everyday landscape as the basis for hybrid structures that seek to enhance the streetscape.

The first intervention, called Holidays in the Sun, creates places for people to sit and introduces greenery into parts of the city where it is currently lacking.

The sisters acquired a permit to remove damaged security barriers known as "Czech hedgehogs" from the streets and transform them into stools.

The designers repainted the structures, which are made from three interconnected steel beams, and added sling-like fabric seats so people can use them to sit down. 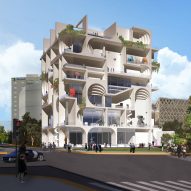 For the Nature Barrier that forms part of Holidays in the Sun, it was more cost effective to manufacture new pieces than repurposing existing ones.

The design reinterprets the metal crowd-control barriers found throughout the city by incorporating planters into upturned sections of tubing.

The products are designed to create spaces for conversation and rest that help the local community and visitors engage with each public space, as well as with each other.

The studio also developed an urban chair, called Lost in Transition, that was installed in central Beirut at the Piazza of Saint Elias Church.

The piece was originally developed for and exhibited at the Alcova site during Milan Design Week 2019 and features several metal seats connected by a central arch.

"The urban chair is versatile, and the numerous spatial configurations allow for multiple uses, whether it is eating lunch with colleagues or reading alone."

The sisters are also working on another installation called "Incomplete Pillars for Incomplete Beings" that will be installed in Beirut later this year. It will comprise prefabricated concrete masonry blocks that will be repurposed as urban planters by filling their hollow cavities with soil.

WORKac revealed its design for Lebanon's Beirut Museum of Art at the beginning of this year, which includes mismatched balconies that will double as exhibition space.