Saito Arquitetos was enlisted to transform a couple's flat within Conjunto Nacional, a 25-storey mixed-use building completed in 1956 by architect David Libeskind. The owners chose the 250-square-metre unit due to the modernist building's prominent location on the city's major thoroughfare, Paulista Avenue.

Prior to the project, the apartment was separated into a series of differently sized and rather split up rooms. The owners wanted the local firm to transform it into a more open space, better suited to their hobbies and lifestyle. Now, the home features more neatly defined public and private areas.

Among Saito Arquitetos' main interventions to Apartamento Apcine was the insertion of a large wooden volume to provide ample storage. It also hosts bathrooms and a laundry room inside.

Wrapping the volume is a galley-like kitchen that connects to a living area, and helps provide cross-ventilation. A dining area is situated between these two zones and features a large table and lights by Louis Poulsen.

The owners are also keen readers, so the firm added a built-in bookcase for their large book collection. It spans the dining room and living room, with slender metal sheets forming shelves.

A sitting area, divided by a concrete wall, is flooded with natural light from large, sliding glass doors.

Saito Arquitetos worked to restore existing features of Conjunto Nacional, including hollow blocks known as Cobogó bricks. It also removed a series of windows that had been added to the property in later years, that enclosed the original balconies. 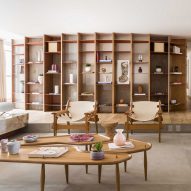 "The project brought back the original balconies of the apartment, which had been incorporated into the interior area by the former resident by advancing the window frames outwards," said the firm.

"The three original bedrooms became an en-suite bedroom, a guest room and a TV room," it said. "The latter is integrated into the other social areas."

Glass tile floors in white and grey tones run throughout to create cohesion, while white walls provide a blank canvas for the home's diverse furnishings.

As a nod to the building's history, the decor combines pieces from modern designers such as Sergio Rodrigues, Oscar Niemeyer, Paulo Mendes da Rocha and Eames alongside new Brazilian makers like Estudiobola, Guilherme Wentz and Jader Almeida.

The counterpoint between the modern and the old are the couple's Louis XV style chairs, which are part of the family's history.

The firm also overhauled three bedrooms in the unit into more flexible spaces, so the couple could better accommodate their large family of children and grandchildren. They include a master bedroom, guest bedroom and a TV room.

In addition to Apartamento Apcine, other renovated apartments in São Paulo are VLP apartment by Pascali Semerdjian and Compact Apartment by Casa 100 Architecture.

A collection of larger, free-standing houses is also prominent in the city, such as a linear concrete residence with pilotis by Perkins+Will and Gama Issa by Studio MK27 and Box House by FCstudio.

Photography is by Romulo Fialdini. 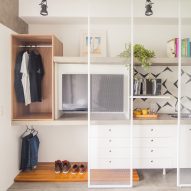