Amazon has debuted its Ring Always Home Cam, an autonomous drone-style camera that can fly around the home to record disturbances when the resident is away.

Connected to a series of sensors in the home, the flying security camera is designed to automatically fly to predetermined areas in the user's residence if one of the sensors is triggered by a potential break-in.

When the sensors are triggered, the owner will receive a smartphone alert that allows them to watch the footage live.

A camera is embedded into the lower part of a central rod, which is attached to a flat, fan-like element on the top of the device that allows it to fly.

When not in use, the drone-like device is designed to fit snug inside a cubic dock with a central opening. Once activated, it rises up from the dock and flies on its pre-set path.

This rids security camera owners of the need to set up multiple devices across the house by offering various viewpoints in a singular, mobile camera.

The Ring Always Home Cam cannot be controlled manually and will only fly where the user has programmed it to.

"Something I frequently hear from customers is 'I have a few Indoor Cams from Ring, but sometimes I would leave the house and couldn't remember if I'd left a window open and wished I had a camera there'," said Ring founder Jamie Siminoff.

"Instead of simply encouraging customers to buy more cameras and set them up in more locations around the home, how could we solve this problem with one solution?"

"We wanted to create one camera that could give users the flexibility of every viewpoint they want around the home, while delivering on our founding principles of privacy and security," added Siminoff.

Designed with privacy at the "top of mind", the Ring Always Home Cam only records when triggered and in flight.

This is ensured by the camera being positioned at the bottom of the device's rod-like base, so it is physically blocked when inside the dock. 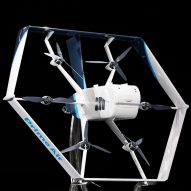 Amazon to deliver purchases by drone "within months"

It also makes a low, humming sound when in motion, so users know when it is recording. "This is privacy you can hear," said Siminoff.

To avoid any accidents, the device features obstacle avoidance technology and has a casing around its propellers.

The Ring Always Home Cam is currently in the development stage, and has not yet been authorised for sale. However it is set to cost $250 (£192) when it becomes available.

This is not the first time Amazon has utilised drones. The e-commerce company previously launched its fully electric and autonomous Prime Air drone, which is designed to deliver packages weighing up to 2.2 kilograms to customers in less than 30 minutes.

More recently, however, drones were used to fight the coronavirus pandemic towards the beginning of the outbreak. Viral video footage showed drones with loudspeakers directing individuals in rural areas in China to go back inside.

There were also reports of the devices using thermal imaging to detect people with fevers from the air.