Kettal has launched a replica of the penthouse pavilion atop VDL Research House, the former Los Angeles home of modernist architect Richard Neutra.

Outdoor furniture manufacturer Kettal will begin selling the replica building, named the VDL Penthouse, alongside an open version with no glass called the VDL Pavilion, in 2020.

Kettal has created the single-storey VDL Penthouse to be a direct replica of the penthouse that tops the home Neutra built for himself in Los Angeles in 1932.

"Under the supervision of Dion Neutra, Richard's son, we have used updated construction methods and materials, while respecting all of the house's original details," said the brand.

The key elements of the structure are a flat roof and plenty of natural light. The Austrian-American architect's aim was to create a living space where he could interact with nature – a characteristic typical of his designs.

"The design embodies Neutra's architectural theory of biorealism, which denotes the relationship between architecture and health," said Kettal.

Both of the replica structures are designed to be ordered and installed in a variety of spaces, such as gardens, on rooftops or as part of existing properties.

VDL Research House underwent many transformations over the years, particularly after a fire destroyed the property in 1966. Neutra rebuilt it with his son Dion, which resulted in greater spatial complexity and a new rooftop atrium. 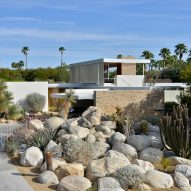 Dion supervised Kettal on the two replica designs, respecting much of the historic house's original details while updating construction methods and materials. The pavilions are also fitted out with an automated smart home system to control lighting, air conditioning and heating.

The VDL Penthouse is designed to be a close replica of the original rooftop pavilion, with glass almost completely enclosing it. However the VDL Pavilion is exposed to the elements, aside from a wall covered in hundreds of vertical slatted fins.

Both designs maintain the outdoor spaces and set-back columns that give full prominence to the roofline of the original pavilion.

"In spite of its formal strength, to some extent it seems as if the roof is floating lightly over the shell of the house," Kettal said.

The two prototypes have been installed at a hilltop property in Los Angeles, on a concrete patio alongside two pools.

Decorating the Penthouse are Kettal's Band club chair by Spanish designer Patricia Urquiola, and a Molo Sofa and center table by Rodolfo Dordoni. The Pavilion features these pieces, along with a Roll table by Urquiola, a sunbed by Dordoni and a Half Dome lamp by Japanese designer Naoto Fukasawa.

Overlooking Silver Lake's grassy park and reservoir, the house served as Neutra's home and studio until his death in 1970. It has recently been preserved and is open to the public.

Born into a wealthy Jewish family in Vienna in 1892, Richard Neutra moved to Los Angeles to practise architecture, after spending time in Chicago and at Frank Lloyd Wright's Taliesin. His son Dion started working with him at the age of 11, and the two went on to collaborate for many years.

In addition to VDL Research House, other notable projects by Neutra are his desert modernist Kaufmann House in Palm Springs and Chuey House in the Hollywood Hills, which was up for sale in 2016.

Photography is by Kettal.