Fundamental Approach Architects has transformed the facade of an eight-storey housing block in Tehran using angular screens of perforated brick.

With two storeys sitting below ground level, the building combines apartments with commercial units at its base and underground parking.

A new double skin of glass and brick panels was added to balance views, light and a connection to the outdoors with the privacy required in the apartments.

"Recently, the expansion of some cities has eliminated the building of urban boundaries, as well as the integration of interior and exterior spaces," Kazemianfard told Dezeen.

"In this project the urban border is blurred, the solid facade replaced by a fluid soft space between the brick and glass skins, which takes advantage of the light passing through."

With the main circulation core at the rear of the block, living spaces have been pushed to the front to maximise views out to the building's surroundings.

The brick panels on the facade have been twisted outwards to angle views from the living spaces out towards a nearby crossing, also serving to animate the facade and create a gap to provide natural ventilation.

"In most existing apartment blocks the connection between the indoor and outdoor spaces is limited to small openings in a solid skin. In this case, the facade is only a protective separator that lets the light inside," added Kazemianfard.

Small strips of planting sit in the gap between the glazing and the brick skin, with greenery climbing up the living-room balustrades.

Internally, textured brick walls reference the external panels, and stone flooring acts as a continuation of the pavement outside to help merge the urban with the interior. 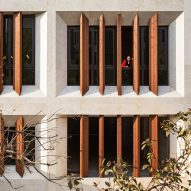 A wide set of steps provides access up to the commercial unit as well as a separate entrance corridor to the apartments, which sit slightly above ground level. An adjacent set of stairs provides access down to the basement level.

Perforated brick walls and panels are a popular method of building, particularly in areas where a large amount of natural ventilation is crucial.