Studio Seilern Architects has converted a half-built conference centre in Andermatt, Switzerland, into a concert hall by lifting up its roof to double the building's size.

Studio Seilern Architects designed the building as part of a hotel and apartment development, which is being built on a former military base in Andermatt, with the aim of turning the Swiss village into a cultural destination.

The concert hall was built within the structure of an underground conference centre, which was under construction as part of the adjacent Radisson Blu Hotel.

"I call  it a whirlwind project, because it was already under construction when we came on board," explained Christina Seilern, principal of Studio Seilern Architects.

"They were essentially building this hotel and they had a room that had been built for conferences, and we were asked to turn it into a concert venue."

To turn the concrete shell of the underground space into an auditorium that was appropriate for large performances Studio Seilern Architects removed the roof and extended upwards.

"We had to convince the client that the size of the room was okay for smaller chamber orchestra music, but really the issue of the volume of the room – particularly the ceiling height was problematic for a proper concert hall."

Raising the roof height from seven metres to 13 metres doubled the space's volume and gave it an above-ground presence. The underground concert hall appears above the ground as a small glass-fronted pavilion topped by an over hanging canopy.

"It is essentially a sculptural element within the village" said Seilern. "The setting we inherited, it is in between two hotels, and it's tucked away – it is what it is.  So let's make this a joyful, practically unexpected structure that is deceptively small from street level."

This glass front allows passersby at street level to look down into the subterranean auditorium, while spectators within the venue can see out to view the sky and surrounding mountains. 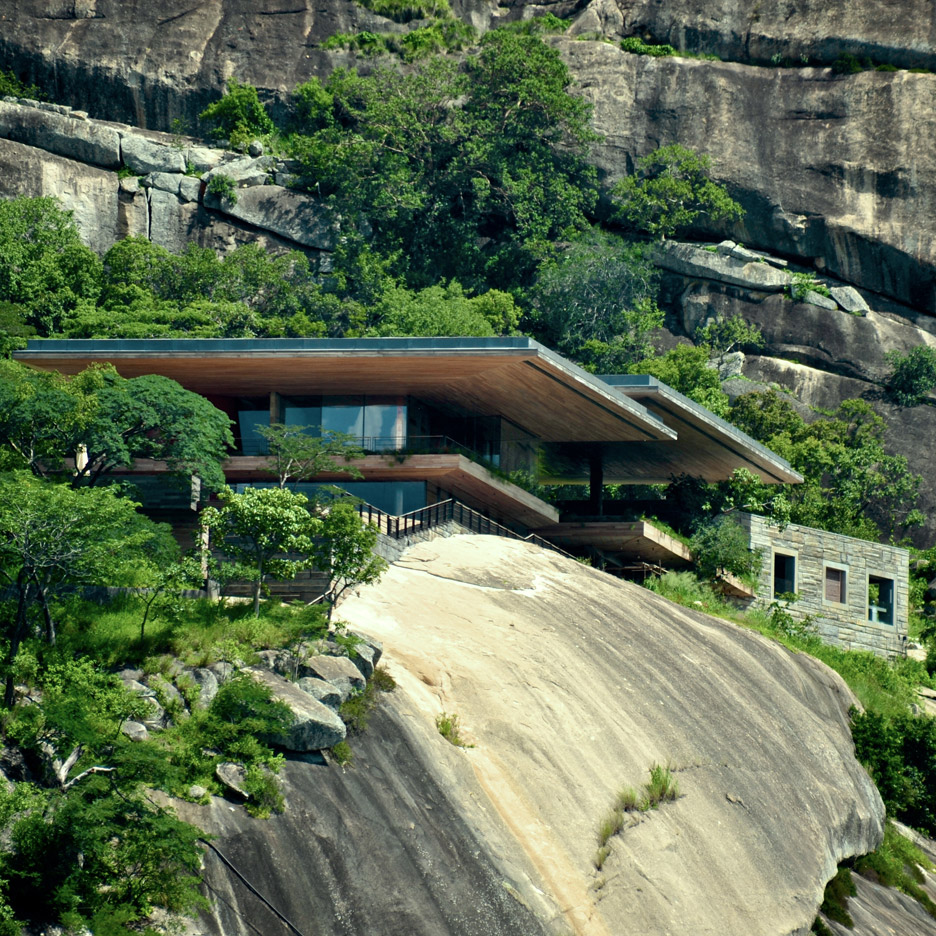 "The idea really was that if you are in a small hall, which this is, and you have a client who has a mission of having big music – big orchestras – for me the importance was that you had to make the space feel bigger," said Seilern.

"We did that by adding a window. We allowed the view of the light, the view of the mountains to come into the space and essentially have a light-filled space, where music and the environment work together."

Along with extending upward, Studio Seilern Architects also extended the building backward to expand the seating capacity. To avoid having to create additional foundations this upper balcony is "hung like a backpack" from the building.

"Two things were important to change the building from a conference centre to a concert hall – pushing the roof up, of course, and pushing the upper balcony back," added Seilern.

The auditorium is designed so that it can host a 75-piece orchestra, but also to be used for smaller performances, along with conferences, catered events and exhibitions.

On the lower level the layers of stepped seating can be retracted to allow for a larger performance area, or fully retracted to create an open space.

Working with Kahle Acoustics, Studio Seilern Architects designed the interior geometry of the auditorium to reflect sound from the stage evenly to every member of the audience.

Along with the natural acoustics, including plexiglass clouds that hang from the ceiling and are designed to appear like a piece of public art from street level, a digital acoustic system has also been installed to slightly slow down the speed of sound when large orchestras are playing.

Alongside the auditorium is a double-height foyer, which is entered from a pavilion that is directly connected to the Radisson Blu Hotel and also has its own dedicated entrance.

In total the development at Andermatt will include six 4- or 5-star hotels, 42 apartment blocks with around 500 apartments, 28 chalets, a public indoor pool and an 18-hole golf course.

The Andermatt Swiss Alps company is also making improvements to the ski area, including building a restaurant, also designed by Studio Seilern Architects.

Studio Seilern Architects was established by Seilern, who was the founding director and design director of Rafael Viñoly Architects' London office, in 2006. The studio has recently completed a performing arts centre at Wellington College in Berkshire, England.