Exposed concrete walls and a set of "hit-and-miss" stairs add character to this formerly lacklustre apartment in east London, which has been overhauled by Merrett Houmøller Architects.

Set inside a housing complex that was built in the early 2000s, the Hackney apartment was previously host to a series of cramped, light-starved rooms as a result of 45 degree-angle walls.

"Stripping the walls and ceiling back to the shell was essential for adding character that never made it into the original new build," explained the practice, which works out of offices in London and Sheffield.

"It also allowed us to reclaim depth and height previously hidden for no real reason."

Non-structural walls have been straightened to allow natural light to better flow through the apartment.

Any existing paint or wallpaper has been removed to reveal the concrete blockwork underneath, including pen and chalk markings left behind by builders during construction. 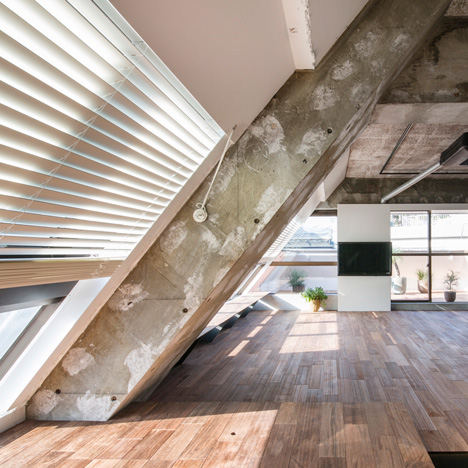 A central partition crafted from walnut wood has been erected to split the 94 square-metre floor plan in half. It is inset with a series of frameless doors, which give access to private areas like the master bedroom and bathroom.

Part of the timber partition hinges off to form a 3.2 metre-high door, which can be used to close off the office and form a second bedroom when necessary.

The other side is dedicated to communal areas like the living area and dining room.

They flank a large, white-steel volume which incorporates a short flight of "hit-and-miss" stairs – where treads are purposefully angled in alternating directions. It leads up to a deck, which the client can use as additional storage space for their belongings.

Below lies the kitchen, which has been completed with glossy pale cabinetry.

In keeping with the apartment's raw aesthetic, decor has been restricted to a handful of standout furnishings like neon-orange dining chairs, an exposed-bulb pendant lamp, and bold artworks.

Merrett Houmøller Architects was founded back in 2014 by architects Peter Merrett and Robert Houmøller. It has previously worked with the British Red Cross to create a brightly coloured mobile kitchen that makes meals for refugees and asylum seekers.

The practice joins a host of other architects and designers that have opted to create an unfinished aesthetic inside residential projects.

Other examples include a flat in Japan by Naruse Inokuma Architects, which features exposed concrete walls smeared with cement, and a Tokyo loft by G Studio Architects, where surfaces have been left with blotches of white paint.

Photography is by Liam Prior and Alan Williams.