Each of the pieces have been given intentionally "clumsy" names of seldom-used Italian words to match their unusual shapes and designs.

"Benevolente" can be translated as "benevolent" or "kind", while "solidale" means "sympathetic" and "gioioso" translates as "happy". The name of each object hints towards the joyful concept behind the collection.

The collection was shown at this year's edition of Design Miami/Basel.

"Three Characters in the Second Act is a vision of the home as a court of domestic deviance played out through the ecstatic surfaces of a bourgeois nightmare," said the designer.

Furman began designing the range soon after completing his initial collection with Abet Laminati, called Four Characters in the First Act, which was shown in an exhibition at Camp Design Gallery curated by Marco Sammicheli in 2017.

"That was the moment when we began to think of launching our vision and project on an international level and Design Miami/Basel seemed the ideal stage to us," said Beatrice Bianco of Camp Design Gallery.

"An independent art gallery, a company with a long-lasting tradition in manufacturing decorative plastic laminate and a visionary artist: a perfect trio that could inspire a new design vision," added Bianco.

Furman said it was a "childhood dream" to work with Abet Laminati, after he saw the work the company did with esteemed designers like Alessandro Mendini and Ettore Sottsass.

The Italian brand was a sponsor of Sottsass' first Memphis exhibition, held in Milan in 1981, at which many now-iconic furniture pieces were clad in the companies' boldly patterned surfaces.

"My little brain could barely take in just how joyous and delicious and inspiring and happy objects that are normally so unnoticeable can be," he explained.

"Later on in life, while being educated in architecture and design at university, I came to fall in love with the creative possibilities of laminates."

"Like clothes, like makeup, like things that allow us to become something new, more dramatic, or just to feel the kind of glamour and confidence that we would never otherwise feel – like these things, laminates, when used in this manner, can bring inert materials to life," he continued. 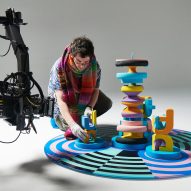 Furman was intrigued with the manner in which laminate can transform wood into something altogether more joyful.

"They can dress up the most boring piece of MDF and turn it into a drag diva telling bitchy jokes, or turn a plank of plywood into a magic beam of queer chinoiserie that would lift the spirits of even the most miserable of minimalist aesthetic puritans."

"Laminate – deceptively thin – can bring depth and magic to whichever material it is applied, and turn the most banal of interiors into cabarets of delight," Furman added.

The Three characters in the Second Act: The Royal Family collection was on show during this year's Design Miami/Basel which took place in the Swiss city from 11 to 16 June.

London-based designer Philippe Malouin also presented an experimental collection of office furniture and accessories at the design fair, which he created using industrial materials including dyed nylon and polyurethane-coated steel.

The London designer and Design Museum director Deyan Sudjic joined Dezeen to discuss the legacy of Ettore Sottsass and the Memphis group at a talk in London in 2018.