The architect designed the Frank Lloyd Wright Visitor and Education Center to accompany the property that Wright designed and built for himself in 1889.

John Ronan Architect's design features a low form and horizontality that "alludes" to the Prairie-style, an aesthetic that Wright developed in response to the flat and broad prairie landscapes of America's Midwest.

The extension is intended to be built with simple materials, including pale brickwork walls and large expanses of glass, intended to complement a "snaking masonry wall" that wraps the existing property.

"The visitor centre is a discreet presence foregrounding the existing historic buildings on the site, more like the existing garden wall which surrounds the site like an element of site infrastructure than a structure which competes for attention," said the firm in a project description.

Facilities will be arranged into two wings in a T-shape. One volume will host the gift shop and reception hall that will be used for audio-visual programming, and an information and ticketing area.

Glazing will run along the front to offer views to the visitor plaza, which will feature a mix of grassy and paved sections. The outdoor area is intended to provide a connection major boulevard Chicago Avenue, as well as the Frank Lloyd Wright Home and Studio.

Ronan's simple scheme was commended by the trust and selected ahead of other proposals submitted by firms including Krueck + Sexton, Pappageorge Haymes, Perkins + Will and Vinci Hamp Architects.

"Ronan's proposal was chosen for its design simplicity, quiet presence within the site, and use of materials referencing the site and surrounding neighbourhood," said the trust's board chairman Bob Miller. 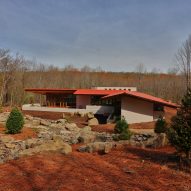 The Frank Lloyd Wright Visitor and Education Center marks the latest update to the property, which also includes the house that Wright built for his mother Anna.

The Frank Lloyd Wright Trust undertook a major restoration of the home and studio in 1974, with restored the property to its 1909 appearance, before opening it to the public.

"This is the most important initiative since the Trust's founding and restoration of the Home and Studio," Miller continued. "It will ensure that Wright's legacy remains vital to future generations."

The Oak Park property is among hundreds of houses that Wright, who is celebrated as one of the most important architects of the 20th century, completed in the United States.

His other well-known designs include Robie House in Chicago, which is emblematic of his Prairie style architecture and Fallingwater in Pennsylvania.

John Ronan established his eponymous firm in Chicago in 1999. Its other projects include the square-shaped Courtyard House, which has wood-wrapped facades and framed views of Lake Michigan, and an academic building at the Illinois Institute of Technology.