A barrel-vault topped with corrugated steel forms the dramatic pine living space within this summer cabin near the town of Nykøbing Sjælland, Denmark.

Designed by Copenhagen studio Valbæk Brørup Architects the cabin, called Vibo Tværveh and reminiscent of an agricultural structure, is 200 metres from the coast and surrounded by forest.

"We wanted to create a house with a form that is connected to the existing rural building tradition," Stefan Valbæk, partner at Valbæk Brørup told Dezeen.

"As a reference to the more industrial agricultural buildings of Danish farms."

The majority of the home's single storey has been given over to this vast, pine-clad living, dining and kitchen space, which can spill out on to a small area of decking via a sliding door.

At the southern end of the cabin, a full-height window looks out into the forest. To the north are three bedrooms and a bathroom.

The master bedroom is at the far northern end of the house, benefitting from a full-height window to the outside, a window looking back towards living space and its own small mezzanine level.

Two bedrooms occupy a wooden box within the central space that can be climbed on via a ladder, doubling as a more secluded study or play space and as a vantage point for overlooking the living area. 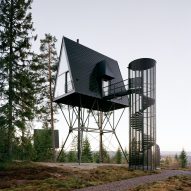 "The big open loft space bridges the two ends of the house," said the architecture studio. "Functions and daylight float through the house, creating an extraordinary spatial atmosphere."

The bathroom, also at the northern end, is a tiled wet room that can be opened to the elements using a sliding door, where a fenced area provides space for outdoor bathing.

Apart from the tiled bathroom and kitchen counters, almost all of the interior surfaces have been finished in pine.

"The interior is all made of pine. The smell, sound and atmosphere is like being in a traditional cabin," described the studio.

"We wanted to copy the materials, colours and atmosphere on the site", said Valbæk, "so we didn't want to paint anything – especially not white."

The exterior is clad in a silvery, treated wood, and the roof is clad with rolled steel plates which, along with the stove's large flue give the cabin an industrial appearance.

Copenhagen-based studio Valbæk Brørup Architects was established by Valbæk and Eva Kristine Brørup in 2005. The studio is one of many practices to have recently designed a woodland retreats. Espen Survevik created a group of treetop cabins in Norway, while WOJR designed a home in a Massachusetts forest.