Filipino designer Kenneth Cobonpue has joined forces with the Star Wars franchise to interpret iconic characters from the cult series as a collection of armchairs, footstools and lamps.

Cobonpue took cues from Star Wars icons when designing the furniture collection, which includes an armchair stitched to look like Darth Vader's mask and a wooly stool designed to emulate Chewbacca's hair.

Created in collaboration with Disney, the pieces use modern materials and technologies to put a contemporary spin on Filipino craft techniques.

"We wanted to incorporate the essence of each Star Wars character into the designs, while staying true to our aesthetic and process of creating by hand," said Cobonpue.

"We reimagined the Star Wars universe through the lens of the Filipino craftsman and creative," he added. "Finding the balance was a bit of a challenge, but it was also a lot of fun."

The collection was initially launched in southeast Asia before debuting in the US last month.

"This is a fun way for us to bring our stories closer to fans, allowing them to connect with Star Wars in a unique way and to take their favourite stories and characters home," said Veronica Cabalinan, the Philippines manager for Disney.

The cocoon-like Vader Easy Armchair features a black cushioned seat and backrest that has been stitched to look like Darth Vader's mask.

An open weave canopy surrounds the chair, which also has a foldable swivel table attached.

Darth Sidious' character is embodied in an armchair with an elevated backrest designed to resemble a hood. Its legs curve slightly forward to create an "elegant" yet "powerful" silhouette to capture the Sith Lord's "formidable presence".

Brown microfibre strips cover the Chewie Rocking Stool to emulate Chewbacca the Wookiee warrior's fur. The stool is wrapped with a fabric belt to represent the character's bandolier, a pocketed belt that holds ammunition.

Other items in the collection include the Little Jedi Hanging Lamp – a sculptural composition made from steel and salago fibre – a material taken from a slow-growing native shrub in the Philippines – that has been applied by hand to add volume and body. 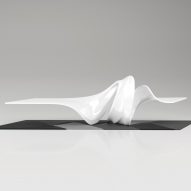 The Jedi pendant features miniature figurines designed to resemble Jedi Knights holding lightsabers, which also serve as the lamp's light source. The light also comes in a floor lamp variation on a black base.

One figurine has been coloured in red to symbolise a Sith Lord – who the Jedis battle against – to act as a "playful reminder of what we can achieve when people unite and work together".

The intricate Imperial Wings Armchair takes its cues from the "unforgettable" symbol of the Imperial fleet, the TIE fighter, a distinctive single-pilot vehicle with two vertical side wings.

Made from hand-woven polyethylene, the chair aims to channel the "agility and strength" of the starfighter, a spacecraft designed for combat.

This is not the first time a designer has looked to the iconic Star Wars series to create products.

Zaha Hadid designed a corkscrew-shaped coffee table inspired by the classic double-bun hairstyle worn by Princess Leia, while Nendo created a series of objects in the form of miniature versions of Darth Vader, Luke Skywalker and Princess Leia.