The California-based couple rehabbed the 86-room motel in partnership with Austin-based hotelier Jeff Burns. He had overnighted at the roadside lodge nearly a decade ago after a cancelled flight led him to the last available room in town.

"Jeff fell in love with it and kept in touch with the owner over several years to see if he would sell it," Jay Carroll told Dezeen. "Eventually he did."

El Rey Court first opened in 1936 along the infamous Route 66, though the motorway would be shortened – and consequently rerouted – to bypass Sante Fe the following year.

Today, the property fortuitously sits near the trendy Baca district in the Santa Fe Railyard, a popular hub for entertainment and shopping.

The motel was originally built with just 12 guestrooms but grew seven-fold to eventually host a two-storey Spanish-American courtyard and swimming pool on a five-acre (two-hectare) plot.

Several different styles and architectural periods show up throughout the property from decades of incremental improvements.

Ceilings are constructed of viga and latilla, traditionally made of peeled logs and branches. 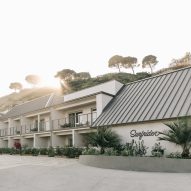 The Carrolls maintained the exteriors and revamped the interiors with a delicate appropriation of Americana flair and Santa Fe folklore.

Details draw on a number of creatives, most notably painter for Georgia O'Keefe and architect Alexander Girard, who used to live in the New Mexico town.

"We wanted to honour the history of the hotel and also add some new design and amenities," said Carroll.

"Local design pioneers like Girard and O'Keefe played a big role in inspiring the project."

The duo spent a year searching for the right design pieces, yielding finds like wood-turned furnishings by designer Dan John Anderson, modular sofas from the 1960s and equipale barrel chairs.

"We worked with regional artisans to incorporate the design details, such as ceramic light fixtures and Chimayo weavings for the headboards, as well as a local woodworker and carver for several communal tables," he added.

"We sought to preserve a lot in our renovation, so it was more so about showcasing its bones. We did make some changes to what was the breakfast room, and is now our bar, La Reina," Carroll said.

Converting the breakfast room into a bar required the most architectural intervention on-site, and has since proven to be a hotspot for Santa Fe locals who favor the traditional banco seating and agave-derived cocktails.

El Rey Court is among a number of motels in the US that have been given a new lease of life as boutique accommodation. Others include The Surfrider hotel in Malibu, the Anvil Hotel in Jackson and The Drifter Hotel in New Orleans.

Photography is by Jay Carroll.