A roughly plastered wall curves over the dining area of this restaurant in Toronto, designed by local studio Odami.

Called Sara, the eatery occupies two floors of a Victorian residence in the Canadian city that dates back to the early 1900s. Odami was challenged to preserve the architectural history of the structure, while creating an inviting setting for over 50 diners.

The layout of the two-level, 223-square-metre space was completely rearranged during the renovation to accommodate the restaurant.

The firm describes the new aesthetic as "earthly minimalism". 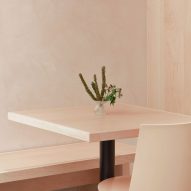 On the first floor, the designers aimed to create a cave-like interior to form an intimate setting for guests. To do so, they covered the ceiling and arched walls with a mixture of plaster and recycled materials created through a series of experiments.

"What we found especially interesting as we were testing things out, was that the forms of the recycled materials really read through the plaster and almost look like fossils," Odami co-founder Michael Fohring told Dezeen.

The second level, by contrast, features pitched double-height white ceilings. It is intended to create an open and airy atmosphere, "providing a feeling of breezy lightness".

Sara was named after the rearrangement of Rasa, the name of a notable restaurant in the area owned by the same client. The design of the new eatery is intended to contrast Rasa's rustic and dark palette, which comprises metals, leather, and other rough materials.

"Sara was envisioned in some ways as its opposite: a more refined and elegant space which is softer and calmer…speaking to the dialogue between these two locations," Fohring said.

Other details in Sara include a turquoise velvet banquette seating that aims to offer the "sensation of being at the edge of a body of water".

Another notable element are the dining tables that feature secret compartments for diners to stowaway their mobile phones. Odami hopes it will encourage customers to disconnect from technology and create a calm environment.

"The concept for Sara Restaurant in Toronto envisioned a more intimate approach, where guests could ditch their devices to more deeply connect with one another, and be truly present in the ritual of dining," the firm said.

The compartments are built into Caesarstone engineered quartz tabletops. Guests can lift up the blocks from the top to place their mobile phones inside for the duration of dinner. Inside, it features a CNC-milled compartment made from locally sourced solid ash wood.

Sara is among a number of other eateries in Toronto, including a cafe that doubles as a barbershop, and a restaurant influenced by the scenery of Venice Beach, California.

Photography is by Kurtis Chen.