Japanese architects Geneto has hollowed out a geometric void in the base of a four-metre-wide house in Osaka that doubles as a garage and communal space.

YMT House, designed by Kyoto-based architecture and design studio Geneto, is raised above the ground to create free space beneath.

The skinny house is on a narrow site surrounded by two-storey wooden structures.

Its whole exterior is clad in black Galvalume panels, contrasting with both the adjacent properties and the warmth of the wood that covers its interior surfaces.

To further maximise the use of space on this four metre by 11 metre site, the home's private rooms were kept modest in size.

As much space as possible was given over to a large, double-height space for living and dining lit by a large, sloping skylight.

"To enrich and enhance the residents' lifestyle while meeting all of their requirements, the project focuses on the scale difference between each room," said the architecture studio.

This central space is activated by a set of large steps that the architects introduced to "bring excitement to daily life", as well as concealing storage underneath.

A box housing the children's room hangs above the space, with small wooden doors that can be opened to overlook the space below. 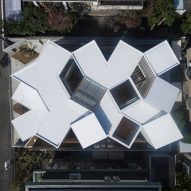 House in Hokusetsu by Tato Architects is designed as a labyrinth

A narrow spiral stair connects these spaces to the kitchen, study and bedroom at the quieter and less-exposed rear of YMT House.

"To experience the scale difference between the architecture and furniture in the narrow space creates an optical illusion, helping the living space feel more spacious," explained the studio.

Given the smaller size of these rooms, the use of all spaces has been maximised, with the staircase also doubling as an area to sit and read, shielded from view by a high balustrade.

At the top of YMT House, a roof terrace has been created  a second living room, accessed via a staircase that leads up from the study room and wrapped by a high wall.

"Instead of having a handrail, an extended wall on the rooftop created an enclosed space that promotes a smooth visual axis to the sky while shutting out the gaze of others," said the studio.

A similar technique of raising up a structure was used by Caleb Johnson for a house in Maine.

Photography is by Yasutake Kondo.