Foster + Partners has unveiled plans to build a timber boathouse on Manhattan's Harlem River for a non-profit that teaches local teens to row.

The British firm designed the boathouse for Row New York on a plot on the banks of the Harlem River, located in the uppermost tip of Manhattan.

"This timber boathouse will fit naturally into the landscape of the riverfront and will transform this stretch of the Harlem River into a lively gathering place for people from all communities," said Foster + Partners founder Norman Foster.

Revealed yesterday, the boathouse is topped by a jagged roof set on a series of columns. This structure is formed by three gabled shapes that join together to form a zigzag shape, and cantilevers at the edges to provide shade underneath.

Images show that the feature roof will cover over a two-storey structure comprising a timber base and a glazed top. Foster + Partners created this simple design to draw on the style of boathouses that previously populated the Harlem bank.

"At the beginning of the 20th century, the river was dotted with many timber boathouses along its banks," the firm said. "The new Harlem Boathouse recalls this tradition with a simple rectilinear structure made entirely from wood."

The top-level of Row New York is designed to accommodate a large multi-purpose hall, changing rooms and classrooms for an after-school programme. It will also include a terrace that looks eastward out onto the Harlem River to frame views of the early morning sunrise as rowers begin their first sessions.

The ground floor will be used for storing shells and rowing kit.

Row New York, which was founded in 2002, offers rowing and academic support to teens, with the aim to develop confidence and cultivate a strong work ethic. Foster's project will replace the organisation's former Peter Jay Sharp Boathouse at 3579 Harlem River Drive in Sherman Creek Park.

The new building is designed to accommodate up to five times as many students as the old structure, and bring all its activities under one roof for the first time.

The building is intended to be fully accessible, with a generous plaza and a ramp that extends to the upper and lower levels.

"In envisioning a design for a boathouse that will serve a diverse population and be a resource to the community at large, I wanted to create a building that was both functional and accessible, but also one that responded to the Hudson River's long history as a busy transportation hub," said Foster.

A tidal strait, the Harlem River flows between the Hudson and the East rivers and separates the island of Manhattan from the Bronx.

Foster's project forms part of a wider regeneration of Sherman Creek Park in Manhattan's northernmost neighbourhood, Inwood. Previously, the park was illegally used as a dumping site but has been adapted into a welcoming public space in recent years, with five acres (two hectares) of waterfront greenery. 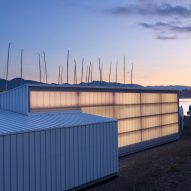 Row New York is one of Foster + Partners' smaller-scale projects. The firm is better known for huge expansive glass-and-steel city buildings such as The Tulip, which is set to be the tallest building in London once completed, a development in Santa Clara and many Apple stores around the world.

Other public boathouse designs include a polycarbonate building in Vancouver, a building by Studio Gang on the Chicago River, and a renovated structure by Snøhetta in Norway.

Imagery is by Foster + Partners, and drawings are by Norman Foster.