The hacked versions of the British designer's stool, including designs by ETC.etera, Oliver M Furth and wHY Objects, were raffled off to raise funds for LA-Más, a Los Angeles initiative that aims to improve circumstances of the city's lower-income and underserved communities.

The fundraiser took place as part of Hem Fest, a day-long event held at Hem's Los Angeles showroom on 22 June to coincide with this year's LA Design Festival.

A number of the practices played with the material of Max Lamb's Last Stool, which is spun from a single sheet of metal, and comes in finishes such as splattered enamel, solid polished copper and brass.

Architecture firm Snøhetta, for example, patinated the polished copper version of the Last Stool to give it a deep blue hue and rough texture, while American designer Kelly Wearstler applied plaster to the surface of the seat.

US firm Rapt Studio, meanwhile, made three redesigns, which included casting the seat in concrete and wrapping it in black plastic and buckles.

Los Angeles interior designer Oliver M Furth's material experiment divided a copper stool in half. One side remains glossy, while the other is weathered. wHY Objects, the design arm of firm wHY Architecture, hacked the chair so that the top twists up and away from the base to create a taller version.

Another version is a playful model by design studio ETC.etera, which set the stool in a concrete foundation peppered with packets of Haribo sweets. A hammer placed atop the stool can be used to hit the drum, turning it into large gong.

A number of the studios created new uses for the stool. Architecture and interior office The Archers, also based in Los Angeles, transformed the piece of furniture into a light with a black shade.

LA-Más, meanwhile, placed a large red pincushion that resembles a tomato on top of the stool, with huge sewing needles sticking out. 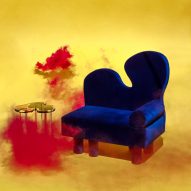 Hem Fest attendees purchased raffle tickets for $10 (£7.88) and placed their bets on different Last Stools, with each going to one winner. The proceeds go towards LA-Más' Backyard Homes Project, an initiative to build affordable homes in back gardens across the city.

The small-scale residences, known as ADUs, or accessory dwelling units, have become more popular in the city after California made changes to state laws. The reform responds to the city's housing shortages and rising rents, and is intended to enable a quick and easy way to provide more affordable housing.

Los Angeles Design Festival 2019, which took place from 20 to 23 June, spotlighted the trend with its ADU Home Tour. The event offered tours of six architect-designed ADUs that have been built across the city, including a design by LA-Más.

Other events during this year's festival included the INTRO/LA exhibition, focusing on local studios shaping the city's design scene.