A 19th-century building in New York's East Village has been given a new lease on life as the headquarters of female-focused co-working club The Wing.

The Wing opened its 22,000-square-foot (2,044-square-metre) headquarters in the brick structure, which was built on 137 2nd Ave 1854 by German architect William Schickel. The move makes it one of just a few companies that occupy a whole building in the city.

Designed in-house, the HQ is intended to riff of the building's original details, such as existing terracotta tile floors, decorative pillars, mouldings and skylights.

"Between the height of the ceilings, the tiles, the moulding, the skylights, and the general grandeur of the space, it all felt really Parisienne to me – and we designed the space around those elements with that influence in mind," The Wing's senior designer Laetitia Gorra told Dezeen.

"This build-out was very much an exercise of working with what we had and building from that," she added.

"I was excited to play with paint and contrasting colours, not only from one room to the next, but also within the rooms," Gorra said.

A foyer at the building's entrance features a navy front desk and a large light overhead, comprising a series of thin rods in a circular shape and small bulbs at the ends. The fixture is a contemporary take on lights from the Gilded Age, referencing the building's history.

"Since the ceilings are so high on our ground level, I didn't want it to feel like one huge rust-coloured room, so I cut the height with two different colours and incorporated large unique light fixtures, which we hung at a low height – both are elements to help the team feel more grounded in the large rooms," Gorra added.

The main floor workspace is decorated with rounded chairs in yellow and greens, and a dining table for working is placed behind. Another room in the rear adds more workspace.

Original skylights bring in plenty of natural light, with plants for decoration.

The lounge-style layout of the HQ's workspaces references the aesthetic of the company's members clubs. There are also a number of similar facilities including the kitchen, lactation room and a quiet room, and "Wingesque" details like custom wallpaper, tiles and furniture. 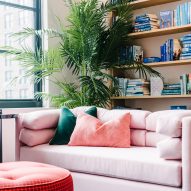 The office also has 10 conference rooms named after books, games and women's schools, like Radcliffe college in Massachusetts and Atlanta's Spelman.

Meeting rooms have sisal flooring to improve the acoustics, while cork is used to cover the walls of spaces designated for more visual teams, such as Gorra's. Employees also have access to an outdoor patio.

The Wing HQ occupies the entire four-storey building, which was originally built as a health care facility for sick German immigrants, and later turned into the Lenox Hill Hospital. In 1880, Anna Ottendorfer donated $68,000 (£53,465) to create a wing devoted to women, making an apt link to The Wing.

The HQ marks another step in The Wing's rapidly-growing business, which launched just over two years ago, and has grown from four to more than 150. Before moving to the East Village, The Wing's internal staff was spread across a few different buildings in Soho.

"Our new office is a testament to our company's spirit  — a magical and historic space that is both beautiful, functional and designed with our majority women staff in mind," said The Wing chief operating officer Lauren Kassan.

The Wing's co-working locations have also spread rapidly, reaching eight outposts across five US cities, including sites in Chicago and Brooklyn's Dumbo area. Later this year, The Wing will open its first international space in London.

The female-focused company forms part of a host of clubs and workspace geared towards women that are opening across the globe in response to a push for gender equality. Others include Toronto's Make Lemonade and AllBright in London.