The Wing, a co-working club dedicated to women, has opened a hub in Chicago featuring details that draw on the Prairie style of 20th-century architect Frank Lloyd Wright.

Located in the Fulton Market District area of Chicago, The Wing's new outpost marks the company's first in the Midwest, and comes hot on the heels of its rapid expansion in the US.

Designed by The Wing's in-house team, and in collaboration with architecture firm CallisonRTKL, the new 8,500-square-foot (790-square-metre) space continues the living room-style aesthetic and pink details of its previous hubs.

Other details, however, reference the surroundings in Chicago, such as the architecture of former city resident and celebrated 20th-century American architect, Frank Lloyd Wright.

"I really wanted to draw a lot of inspiration from something that was more Chicago-specific, and tried to design something for the women of Chicago with inspiration that came from the city," Laetitia Gorra, who led the project, told Dezeen.

"So I did draw a lot of information based from Frank Lloyd Wright who built his career in Chicago."

Among the team's main points of reference was the Prairie architecture style, which Wright developed in response to the flat and broad landscapes of America's Midwest. The style, which Wright "consummated" in his Robie House in Chicago, typically featured strong geometric forms and muted tones that would blend into a natural landscape.

"You'll see a lot of hexagonal shapes throughout the space, [with] lots of muted tones," Gorra said.

"I picked up a lot of the rust colour and the mauve colours from his designs, and then incorporated with those our branded colours of more darker hues, like navys and dark greens."

Details include hexagonal multi-coloured tiles that cover the floor leading to the events space, where The Wing will regularly host talks and film screenings, alongside other geometric fabrics. 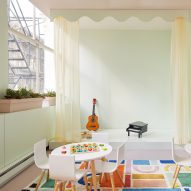 The Wing is the brainchild of Lauren Kassan and Audrey Gelman, and was set up to provide women with a mix of open-plan and private workspaces, as well as programmed events.

Established with women in mind, the club provides facilities that aren't found in standard office spaces. Its location in New York's Soho, for example, was recently expanded to include The Little Wing for children to offer a solution to a child-care issue.

In Chicago, Gorra has created beauty areas and pumping rooms for breastfeeding that are "a safe, calm, soothing extension" of the home, rather than sterile spaces often provided.

Furniture is custom-made throughout the workspace, from caned wood chairs, seats with block colours and bright yellow sofas. Different seating setups are intended to allow members the flexibility to either chat casually with girlfriends or work, and the chairs are even tailored to women's body shapes.

"Furniture designers that we work with to be able to adjust seat height to make sure that there are ergonomic for women, and comfortable for women to be sitting in based off of kind of the mean height of women, which is five foot four inches," Gorra said.

"We're really tailoring all of our seating and all of our spaces to finding ergonomic seating that's comfortable for women to be sitting at throughout the whole day," she added.

Wooden shelves are filled with colourful books curated by New York stores the Strand and Rizzoli books. Members can borrow them too, giving a cosy library-feel to the space. Arches punctured into these shelves lead through the different areas.

The Wing Chicago also debuts the company's cafe concept and is stocked with goods from women-owned and co-owned bakeries, cheesemakers, winemakers, breweries and farms. Artwork completing the decor is produced by female artists as well.

The Wing launched its first space in New York's Flatiron neighbourhood in 2016, and then quickly expanded to outposts in Soho and Dumbo. It now has locations in Washington DC, San Francisco and Los Angeles, and plans to open clubs in Europe.

The company's expansion mirrors the rapid growth of other workspaces and clubs geared towards women – Seattle's The Riveter, Toronto's Make Lemonade, London's AllBright and Manhattan's Chief have all opened in recent years.

Photography is by Jasmine Pulley.