Banksy has revealed that he designed the Union Jack stab-proof vest that British rapper Stormzy wore during his headline set at this year's Glastonbury festival.

The Grime artist began his set on the festival's Pyramid Stage wearing a stab-proof vest with a black and white Union Jack flag spray-painted on the front.

It was later revealed to be designed by British street artist Banksy.

"I made a customised stab-proof vest and thought – who could possibly wear this? Stormzy at Glastonbury," Banksy wrote in an Instagram post, which pictured the star in the vest backstage.

"Last night I headlined Glastonbury in a stab-proof vest custom made by the greatest, most iconic living artist on planet earth, the one and only Banksy," said Stormzy in his own Instagram post.

Stormzy wore the vest as a comment on Britain's knife-crime crisis and racial inequality in the criminal justice system – an issue he often speaks about publicly and addresses in his music.

During the set he played a clip of a speech by Labour MP for Tottenham David Lammy about black men and the justice system.

"Stormzy using his headline spot at #glastonburyfestival2019 to speak out about the injustice of young black kids being criminalised in a biased and disproportionate justice system," wrote Lammy in a tweet.

"Glastonbury is one of the biggest cultural platforms in the world, watched by a global audience," Lammy followed up in a Facebook post.

"At the heart of what Stormzy sings about is social injustice, particularly for black and ethnic minority young men growing up in cities like London, Birmingham and Manchester," he wrote.

"I was really pleased that he captured some of what I've said about the bias in the criminal system," added the MP. "I have the platform of the House of Commons, but there's no way I can reach or have the kind of reach of an award-winning artist." 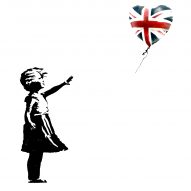 In July 2018, Stormzy also launched the Merky Books publishing imprint with Penguin to give young people the opportunity to get published.

Banksy often uses his work to comment on current political or social issues. Back in June 2017 the artist created a limited-edition print that he promised to send to those voting against the Conservative party in the UK election.

However the artist later recalled the free print promotion, after being warned that it could "invalidate the election result".