The Eindhoven-based studio has renovated the existing red brick building and added a black timber-clad extension to its roof.

"One of the biggest challenge for us was to shape the roof extension in such a way that it would form a new chapter in the history of the building," Wenink Holtkamp Architecten co-founder Jan-Peter Wenink told Dezeen.

"But it also needed to engage into a modest and respectful relationship with the existing building."

This additional level is clad in planks of waxed black timber, arranged in a diagonal pattern that mirrors the brickwork on parts of the existing industrial structure.

"We deliberately chose a different material than the existing building, in order to make a clear distinction between the two parts," Wenink added

Black aluminium was used for the extension's window frames and vertical elements. The extension is stepped back from the existing facade, creating space for roof terraces.

Designed in 1925 by architect Albert Benoit, De Lakfabriek was a part one of the largest leather tanneries in Europe. In 2010 the factory complex started to be developed, and De Lakfabriek is the first building to be converted into housing.

Wenink Holtkamp Architecten renovated the factory's facades. Although the original steel frames could not be preserved, they replaced them with aluminium frames with a similar profile. Inside, the architects left the raw concrete structure visible. 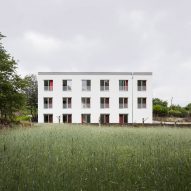 "We only removed loose paint parts and stucco, the rest of the walls and ceilings we left as untouched," said Wenink.

Photographs showing workers and scenes from the factory's history have been used to decorate the common areas of the apartment block.

Wenink Holtkamp Architecten worked with each buyer to customise their future homes.

"There was a varied group of clients, from single starters, young couples, families and pensioners," said Wenink.

"All with a common passion for industrial architecture and the desire to stay as close as possible to the authentic character of the building."

Wenink Holtkamp Architecten has previously converted similarly industrial spaces. In 2016, the studio transformed a former grain silo in the Dutch city of Deventer into a community food hall.