Tuñón Arquitectos has completed Casa de Piedra, a house in the town of Cáceres, Spain, which is built from solid stone and laid out in a grid of nine cube-shaped rooms.

Casa de Piedra is built from local quartzite, with widows framed in granite. Located on a plot sloping slightly down towards the town, Tuñón Arquitectos designed its thick walls to shade residents from the sun and provide privacy.

Each of the house's four elevations is punctuated by three square windows, which aline with the regularly arranged rooms inside.

Casa de Piedra's ground floor is a grid formed of nine identical rooms laid out in a three by three arrangement.

In the central room a spiral staircase made from white-painted metal curves down to the basement level, where there is a garage, a laundry and a guest room.

A kitchen, a dining room, bedrooms and living rooms are arranged around the perimeter, along with an open patio that serves as an atrium.

Built-in storage and bathrooms have placed in between the rooms, which are connected with circulation corridors.

Doors and windows line up to allow for clear views through the home to the surrounding landscape.

Interiors have been kept minimal, with white concrete walls and grey concrete or oakwood floorboards. 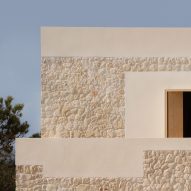 The numerous closets avoid possessions cluttering the house, and all the building services are concealed beneath the floors.

Alongside the house on an open platform there is a swimming pool and a terrace, that are both also square in plan.

Tuñón Arquitectos was founded by Emilio Tuñón Álvarez, who was a founding member of Mansilla + Tuñón Arquitectos, the architects behind the award-winning MUSAC Contemporary Art Museum of Castilla y León.

Photography is by Luis Asín.