US firms SHoP Architects and Ken Smith Workshop have turned a sliver of land along the East River into an ecological park featuring gardens, a faceted metal screen and a rocky beach that serves as habitat for mussels.

Just south of the Lower East Side neighbourhood in Manhattan, Pier 35 sits along the East River and faces towards Brooklyn. The new park anchors the northern tip of the East River Waterfront Esplanade, a two-mile-long (three kilometres) stretch of land that is owned by the city.

The park offers much-needed outdoor space for residents, while also serving as a habitat restoration area. The project was designed by SHoP Architects and landscape firm Ken Smith Workshop, which are both based in New York.

For the rectangular site, the team created several gardens and a large, sloping metal screen that will eventually be covered with foliage. In the evening, the perforated structure is illuminated by golden light.

"The pier features an accordion-like design, creating the sense of a folded terrain," said the team. "A series of landscaped lawns and dunes create a walkway, while an inclined, plant-covered folded screen wall acts as a 'green' billboard to the city." 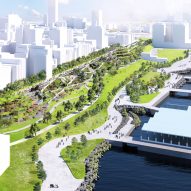 The faceted screen measures 35 feet (11 metres) in height and over 300 feet (91 metres) in length. In addition to serving as a dramatic backdrop, the screen hides a sanitation shed on a neighbouring pier.

On the eastern side of the park, the screen merges with a canopy structure that shelters a "raised porch" with swings, where residents can take in views. A wall in this area is sheathed in strips of weathering steel that appear woven together like a basket.

The project also entailed the creation of a beach that will provide habitat for mussels. The restoration zone, which is composed of precast concrete and a rock garden, is meant to replicate the characteristics of the historic shoreline.

"The pier's folded terrain drops down into the river, creating a gradient of sloping planes that interface with the daily rising and falling of the tides," the team said.

Throughout the park's planning phase, the team sought public input by attending more than 70 meetings with community boards, tenant groups, elected officials and others.

"The resulting design provides an often-overlooked section of the East River esplanade with a lush, landscaped outdoor space for passive relaxation and enjoyment," the team said.

In recent years, New York City has put greater focus on enhancing its waterfront. In March, the city revealed a proposal to redesign the "vulnerable" shoreline of Lower Manhattan in order to make it more resilient to rising sea levels. In Brooklyn, a public park was created by James Corner Field Operations for a waterfront site that surrounds the former Domino Sugar Factory.

Photography is by SHoP Architects.